How Would the President’s Jobs Proposal Affect the Economy? 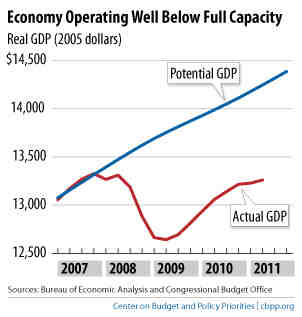 My colleague Jared Bernstein has a good description of the jobs package that President Obama proposed last night. Here’s why measures like these are needed and what they can accomplish. The economy’s production of goods and services (actual GDP) is roughly a trillion dollars less per year than what it is capable of producing (potential GDP), and demand for goods and services is growing too slowly to close the gap.  As the chart (from this chart book) shows, the economy fell into a deep hole in the recession and growth is flagging.  The result?  Stubbornly high unemployment and a permanent loss of wages and business income from the economy’s failure to operate at full capacity. Measures like those that the President has proposed increase demand over what it would otherwise be — thereby closing some of the gap between actual and potential GDP, generating additional income, and creating jobs.
Image

The following table, based on estimates by Mark Zandi, chief economist for Moody’s Analytics, illustrates the plausible magnitudes of those effects. Zandi estimates that real GDP will be 1.9 percent higher next year, and 0.9 percent higher in 2013, under the Obama proposals than it would be if Congress takes no further steps to help the economy and lets the payroll tax cut and extra weeks of federal unemployment insurance benefits currently in place expire as scheduled at the end of this year. The President’s proposals would boost incomes and create jobs over the next two years, reduce the risk that the economic recovery will stall out, and increase the likelihood that the recovery will strengthen.  Those are real economic gains from reducing the size of the output gap.  And if enacting the proposals helps rekindle Americans’ optimism about the economy, the gains would be even bigger than shown here.
Topics:
Federal Budget, Economy