We noted today that nearly every state is funding higher education at lower levels than before the recession, forcing tuition hikes that make college less affordable — and some states are planning more funding cuts.  The budget plan that the House is expected to approve today would likely put a college education further out of reach for many young Americans.  As our new paper explains, the budget deeply cuts Pell Grants, which help more than 8 million students from low- and modest-income families afford college.

Research shows that Pell Grants and other need-based aid enable more low- and moderate-income students to attend and complete college.  Unfortunately, Pell Grants have lost considerable purchasing power over time.  The maximum grant now covers about 30 percent of the average cost of a four-year public college, the lowest share in 40 years.  The House budget would shrink Pell Grants’ purchasing power further by freezing the maximum grant ($5,775 per student for the 2015-2016 school year) for ten years, even as tuition and room and board costs will continue to rise (see chart). 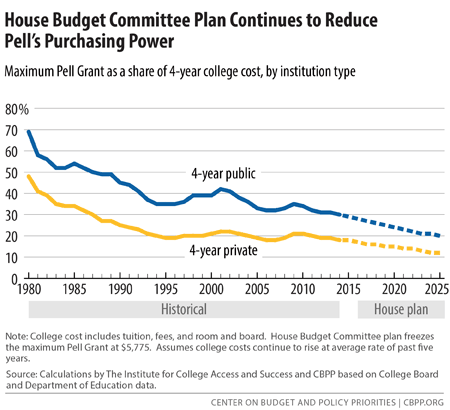 The House budget also eliminates Pell Grant funding on the “mandatory” (entitlement) side of the budget and squeezes Pells’ other funding source, non-defense discretionary funding, over the next ten years.  Thus, under this budget, it would be virtually impossible for Pell Grants to receive sufficient funding to maintain current eligibility rules, even at the frozen grant levels the budget proposes.  Policymakers would likely restrict eligibility or cut benefits even more, or both.

The House budget’s justification for cutting Pells — that the program’s finances are unsustainable — is unconvincing.  Program costs did rise substantially between 2007 and 2010, largely due to the recession (which depressed family incomes and led more people to pursue college in order to improve their education and skills) and modest expansions of Pell benefits.  But costs have since fallen by roughly one-fifth in inflation-adjusted dollars and are projected to keep falling slightly over the next decade.

The House budget’s Pell cuts would add another barrier to education for low-income students — a group with disproportionately low rates of college attendance and graduation.  Also, it would likely increase their debt burden.  Pell Grant recipients are already more than twice as likely also to have student loans as other students.

In short, the budget would reduce opportunity for students from modest backgrounds who are striving for a college education and a better future.