Hospitals in states that have expanded Medicaid as part of health reform are seeing a large drop in uninsured patients and higher-than-expected revenues, a new report from the PricewaterhouseCoopers (PwC) Health Research Institute finds.  It’s the latest evidence of the Medicaid expansion’s benefits for states, their businesses, and their residents. Examining financial data for the first half of the year from the country’s three largest health care providers, PwC found a 47 percent drop in admissions of uninsured patients at affiliated hospitals in Medicaid expansion states.  This suggests a sizable drop in uncompensated care — consistent with a nationwide survey of hospitals by the Colorado Hospital Association after the first quarter of the year.  PwC also found that the rise in the share of patients with health coverage boosted providers’ revenues even more than they had anticipated. Meanwhile, the Urban Institute projects that hospitals in the 23 states that have not yet expanded Medicaid (see map) will lose out on $157 billion in reimbursements between 2013 and 2022.
Image 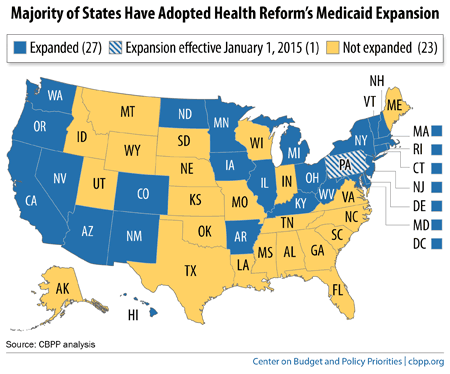 This PwC report is one of several indicators of the growing gap between states that have expanded Medicaid and those that haven’t.  The Medicaid expansion is driving large gains in health coverage, while states that haven’t expanded risk forgoing those gains as well as millions of dollars in savings.

Topics:
Health Reform, Coverage Trends, Medicaid and CHIP, Health
PreviousToday’s Jobs Report in Pictures
NextIn Case You Missed It...
Stay up to date
Receive the latest news and reports from the Center