| By Paul N. Van de Water
The Heritage Foundation says that our methodology to calculate what caused the federal budget deficits of the coming decade “fails statistics 101,” but, in fact, it’s the Heritage response that’s faulty.  Here’s why:
Image 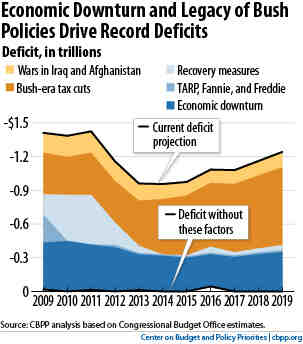 This chart from my colleagues Kathy Ruffing and Jim Horney, which has circulated widely in the blogosphere (for example, here, here, and here), shows that the economic downturn, the 2001 and 2003 tax cuts, and the unpaid-for wars in Iraq and Afghanistan account for virtually the entire deficit over the next ten years. As President George W. Bush took office in January 2001, the Congressional Budget Office (CBO) and the Office of Management and Budget were projecting the budget would run surpluses for the ensuing two decades or more.  Today, these agencies and virtually every reputable private budget expert project huge and rising deficits under current policies as far as the eye can see.  Our analysis and chart explain what happened — in other words, what has changed since 2001.  They go beyond recent analyses by CBO and the Pew Charitable Trusts to examine how bad policies and bad luck poisoned the fiscal outlook in the decade ahead. In brief, we relied on CBO’s estimates of enacted legislation, the two wars, the effect of the economic downturn on spending and revenues, and the cost of federal efforts to stabilize the financial system.  To each, we added the resulting increase in federal debt-service costs.  We did not include the costs of the Medicare prescription drug benefit that Congress enacted in 2003 only because we could not estimate its cost with the same confidence as with the other policy changes.  If we had included it, however, that would have strengthened our conclusion that policies enacted during the Bush years and the economic downturn are driving the large deficits projected over the next decade.  Without these factors, the budget would be roughly in balance over the next decade. Heritage charges we arbitrarily picked certain elements of the budget to blame for the deficits, saying one could also single out Social Security and Medicare to explain the entire deficit.  Yes, the costs of Social Security and Medicare will rise over the next decade as more baby boomers retire and health care costs continue to rise.  But Heritage misses the key point: Analysts knew this would happen back in 2001; their forecasts of large surpluses over the following two decades took those increases into account.  Thus, the growth in Social Security and Medicare (except for the prescription drug benefit) doesn’t explain why the budget situation has deteriorated so sharply over the past ten years. It comes back to the basic question: what has changed since 2001? The tax cuts, the wars, and the Great Recession are the main culprits.
Topics:
Federal Budget, Federal Tax, Budget Outlook, Personal Taxes, Business Taxes, Economy