The Governor of Oklahoma and policymakers in Kansas, Missouri, and other states have proposed income tax cuts that they say will boost economic growth.  To make their case, they have cited the example of Texas, which has no income tax and where growth has been strong. But in reality, Texas is not a helpful model for economic growth for the rest of the country.  True, the number of people and jobs in Texas has been expanding.  But, as we discuss in our recent paper, much of Texas’ growth results not from its policies but rather from factors that state officials cannot control and that other states cannot emulate. 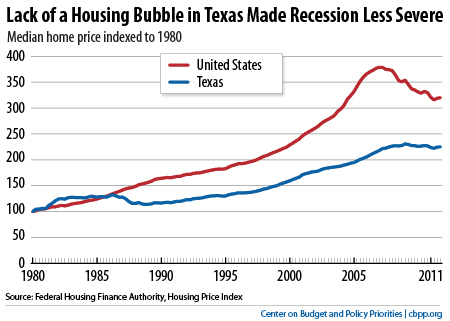 And not everything is rosy in Texas.  For instance, Texas has lots of low-wage jobs and lots of poverty.  In 2011, close to one in ten Texas hourly-wage workers were paid at or below the minimum wage — well above the U.S. average of six percent.  One-quarter of people in Texas lack health insurance — well above the national average of 16.3 percent.  And, in part because wages are low, a large share of Texans are poor.   In 2010, 18.4 percent of Texas families lived in poverty.   Some 1.8 million (26 percent) of Texas children lived in poverty. Note: We originally stated that 15.7 million children (22 percent) of Texas children lived in poverty. Those figures are for the U.S. as a whole. We revised this post to correct the figures. Even if it were possible for other states to replicate these features, the fact that so many Texans have not benefited from the state’s economic growth makes Texas a dubious model for the nation.