| By CBPP
Testifying at a House Agriculture Committee hearing this morning, CBPP President Robert Greenstein discussed SNAP’s track record of eliminating severe hunger and malnutrition in the United States, as well as its growth in response to economic conditions and need.  His oral remarks are below; click here for his written testimony.

Mr. Chairman, thank you for inviting me and for the opportunity to be here today. I’ve been working on this program for over 40 years, and had the privilege at one point in the late 1970s to serve as the Administrator of the Food and Nutrition Service. I think Doug [Douglas Besharov, professor at the University of Maryland School of Public Policy, who also testified] and I agree that SNAP has played the central role in eliminating severe hunger and malnutrition in this country.  This led former Senator Bob Dole to call it the nation’s most important social program advance since Social Security. And over the years, SNAP has taken advantage of modern technology and business practice to become more efficient and accurate.  Its error rate is now at an all-time low.  Fewer than 1 percent of benefits are issued to ineligible households. SNAP’s benefits are relatively modest.  They average about $1.40 per person per meal. Benefits are also highly targeted by need.  92 percent of SNAP benefits go to households with monthly incomes below the poverty line, 57 percent to families below half the poverty line. SNAP can help families bridge temporary hardship until they get back on their feet.  Between 2008 and 2012, about half of all new entrants to SNAP participated for one year or less and then left the program. SNAP also appears to have important long-term positive effects on children.  A recent study [based on data from the rollout of SNAP in the late 1960s and early 1970s] found that children who had received SNAP had much higher high school graduation rates and better health — including less obesity — in adulthood than comparable low-income children who didn’t have SNAP.  And women who’d had access to SNAP in childhood had higher earnings and lower rates of welfare receipt in adulthood. Now, SNAP participation and costs have grown in recent years.  Both CBO [the Congressional Budget Office] and other analysts have found the biggest reason by far is the economy.  The next most important reason has been an increase in the share of eligible families — especially low-income working families — who participate. In 2002, only 43 percent of eligible low-income working families participated.  In 2012, 72 percent did. Congress and the Bush and Clinton Administrations concluded that some aspects of SNAP were making it unnecessarily hard for working-poor families to enroll.  They concluded that if families leaving welfare for low-paid work lost their SNAP benefits at the same time, and had difficulty feeding their families, that would be contrary to welfare-reform goals.  Most of the policy changes, for example, that Doug lists in his testimony and were made since 2000 were made to better serve low-income working families. As this chart indicates, SNAP has made major progress here — the share of SNAP families who are on welfare has plummeted; the share who work has increased pretty dramatically.
Image

This brings me to the biggest cause of SNAP’s recent growth — the deep problems in the economy, from which we’re only starting now to make substantial progress.  Some people look at the growth in SNAP caseloads and wonder if they’ll ever come down. But the best assessment is that as the recovery finally reaches ordinary families, caseloads and costs will drop significantly. That is CBO’s assessment.  Caseloads have dropped by about 1.5 million people since the end of 2012 and now stand at about 46 million; CBO projects they will drop to below 33 million over the coming decade. And, when budget analysts, whether they are conservative or liberal, ask if federal programs are growing in ways that add to the nation’s fiscal challenges, they ask if program costs are rising as a share of the economy — growing as a share of GDP.  CBO’s projection for SNAP is that its costs will decline as a share of the economy as the economic recovery continues, and by 2020, be all of the way back to their 1995 level, as a share of GDP.
Image

Finally, does SNAP discourage people from working?  The conclusion of a team of leading researchers who examined all research in the field is that SNAP does not pose significant work disincentives and its effect on the amount that people work is small. Indeed, Census data show that of people who worked before enrolling in SNAP, 96 percent then worked in the year after beginning to get SNAP benefits, which suggests turning to SNAP does not lead people to cease working.
Image 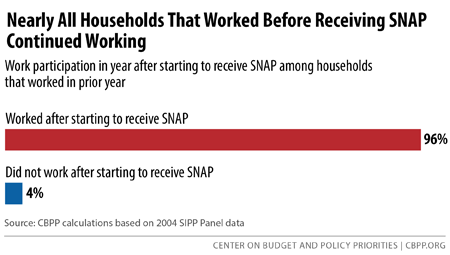 SNAP’s work requirements are stronger than is often realized.  SNAP has the single toughest work requirement of any federal program — people aged 18-50 who are not raising children are limited to three months of SNAP out of every three years, unless they’re working at least half time.  Job search does not count; if you can’t find a job, you’re out after three months.  This requirement was suspended in much of the country when the economy was weak, but it’s now coming back.  At least 1 million such people will be removed from the program between now and the end of 2016. Now, that doesn’t mean that SNAP can’t do better in helping people gain jobs, and the recent Farm Bill establishes demonstration projects to learn how to do that more effectively. In conclusion, SNAP is a lifeline for millions of people.  The program can be improved.  But it’s worth noting that when the Simpson-Bowles commission and the Domenici-Rivlin deficit reduction task force called for substantial budget cuts, they both excluded cuts in SNAP, given its strong track record in improving access to food — and reducing poverty and hardship — for millions of our less-fortunate fellow Americans. Thank you.

Share
Facebook Twitter Print Email
PreviousCould Your School District Streamline Its Breakfast and Lunch Programs?
NextThe Risks of Dynamic Scoring
Stay up to date
Receive the latest news and reports from the Center