Governors’ Budgets Are Out, and They Aren’t Pretty

Governors across the country have released their budgets for the coming fiscal year, and while states are facing serious problems — depressed revenues, rising human needs, depleted reserves, and the end of temporary federal aid — many governors could be making much smarter choices about how to respond. 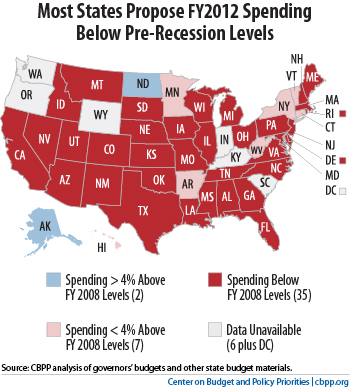 For example, Ohio’s Governor John Kasich proposed last week to cut aid to local governments and libraries by more than $1 billion, reduce higher education funding by 11 percent and K-12 funding by 10 percent (equivalent to more than 16,500 full-time teachers’ salaries), and cut payments to health care providers that serve Medicaid beneficiaries by more than $700 million, among other cuts.  Yet his proposal contains no significant new revenues.

States’ basic problem remains the economy:  with state tax revenues still in a deep slump due to high unemployment and weak consumer spending, states face an estimated $112 billion budget gap for the upcoming year that they have to close.

Nevertheless, our updated analysis shows that many governors’ budgets rely entirely on program cuts rather than using every tool available, like bolstering revenues and tapping any available reserves.  As a result, most governors are proposing to keep spending below pre-recession levels (see map), even though states have more kids to educate and more people who need health insurance.