Today’s Commerce Department announcement that the economy grew at an annual rate of 1.7 percent in the June-July-August quarter (up from the earlier estimate of 1.6 percent) does little to change the picture of an economy that is growing far too slowly to replace any time soon the millions of jobs that disappeared in the recession . As the charts at bottom show, economic growth is slowing at a time when we still have an unprecedented jobs deficit. Economists define a recession as the phase of the business cycle marked by a widespread decline in economic activity, and by that definition the Business Cycle Dating Committee of the National Bureau of Economic Research (a private organization that is the recognized arbiter of business-cycle dating) declared that the recession ended in June 2009. Economists don’t have a technical term for what has followed, which is sluggish growth, stubbornly high unemployment, and a huge gap between the economy’s current performance and how it would be performing if it were running on all cylinders, with high levels of employment. In business-cycle lingo, we are in the “recovery” or “expansion” phase of the business cycle, but the reality is that we are still in a massive economic slump. One of the important contributors to ending the recession was the stimulus to spending from the 2009 Recovery Act. But the time when the stimulus had its greatest effect in spurring economic growth has passed, and households and businesses have not yet picked up the slack. Thus, we face the prospect of a protracted economic slump, especially if policymakers can’t walk and chew gum at the same time by enacting temporary policies that stimulate more economic activity now, when the recovery needs a boost, while simultaneously taking steps that will begin to address the long-term budget deficit once the recovery is on firmer footing.
Image 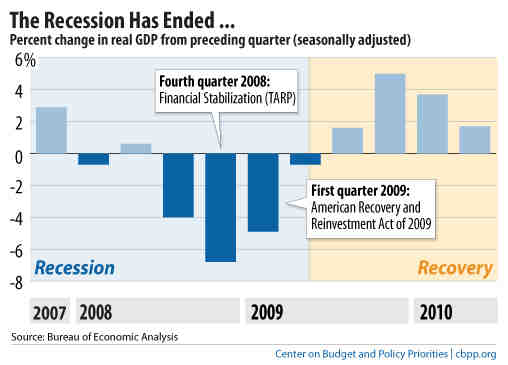 Topics:
Economy
PreviousA Caution on Biennial Budgeting
NextWhat Lies Ahead After Jobs Fund’s Expiration?
Stay up to date
Receive the latest news and reports from the Center