While the congressional debate over funding the federal government for the rest of the fiscal year is getting considerable public attention, few seem to recognize just how far the goal posts have shifted.

The most recent Senate Democratic proposal — an amendment offered by Appropriations Committee Chairman Daniel Inouye (D-HI) that the Senate rejected on Wednesday — was nearly $30 billion below a proposal that Senators Jeff Sessions (R-AL) and Claire McCaskill (D-MO) made last year.  During 2010, Senate Republicans pushed aggressively for the Sessions-McCaskill funding level and voted for it unanimously on the Senate floor.  Yet in Wednesday’s vote, not a single Republican backed the even lower Inouye proposal, and a number of Republicans castigated the funding level as not serious.

The Inouye proposal was also $40 billion below the fiscal year 2010 funding level, adjusted for inflation — the normal and appropriate measuring stick for assessing changes in appropriations bills from one year to the next, since funding levels must keep pace with inflation in order to maintain the same level of public services.

That proposal now represents the high end of the scale.  The other end is the appropriations bill that the House passed last month (H.R. 1), which would cut discretionary for funding by $92 billion below the 2010 level, adjusted for inflation (and by more than $60 billion below the nominal 2010 level). 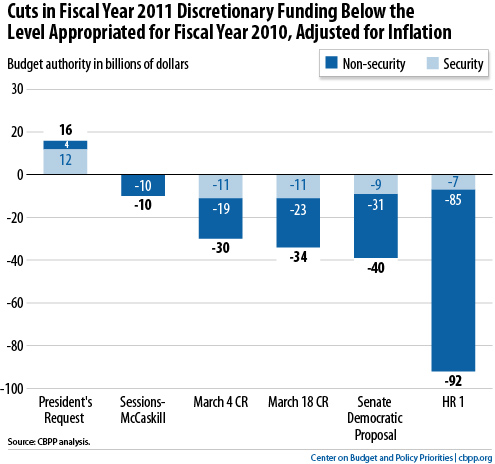