“Generational Accounting” Is Misleading and Uninformative

| By Paul N. Van de Water
The topic of “generational accounting” will likely surface when economist Lawrence Kotlikoff, who helped develop the approach over 20 years ago, testifies at tomorrow’s Senate Budget Committee hearing.  Generational accounting purports to compare the effects of federal budget policies on people born in different years.  But it’s far more likely to obscure than illuminate the budget picture, as we have explained. Generational accounting calculates “lifetime net tax rates” for each one-year cohort of the population through at least age 90 and a separate lifetime net tax rate for all future generations combined.  Those measures are supposed to reflect each generation’s tax burden, minus the benefits it receives through programs such as Social Security and Medicare, under existing budget policies. But generational accounting rests on several highly unrealistic assumptions.  Its calculations of lifetime net tax rates assume that there would be no changes whatsoever in current law for taxes or benefit policies for anyone now alive.  It doesn’t account for the benefits that government spending can have for future generations (for example, education and infrastructure spending that raises living standards).  And it ignores the fact that our children and grandchildren will be richer than we are and have more disposable income, even if they pay somewhat higher taxes. Generational accounting’s most serious flaw may be that it requires projecting such key variables as population growth, labor force participation, earnings, health care costs, and interest rates through infinity.  Budget experts recognize that projections grow very iffy beyond a few decades — and spinning them out to infinity makes them much more so.  The American Academy of Actuaries describes projections into the infinite future as “of limited value to policymakers.” The Congressional Budget Office, CBPP, and other leading budget analysts focus instead on the next 25 years or so, which amply documents future fiscal pressures and presents a reasonable horizon for policymakers.  These organizations produce simple, straightforward long-run projections that show the path of federal revenues, spending, and debt under current budget policies.  In that way, they show clearly what’s driving fiscal pressures, and when (see chart).
Image 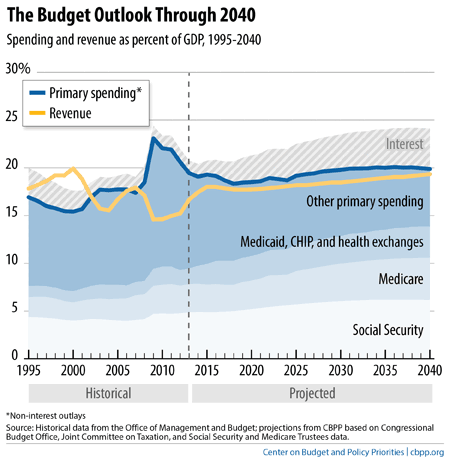 Policymakers should certainly look beyond the standard ten-year horizon of most budget estimates, but they already have the tools to do that. Generational accounting is hard to interpret and easily misunderstood, and including it in the federal government’s regular budget reports and cost estimates would be a mistake.

Senior Fellow
Share
Facebook Twitter Print Email
PreviousSpreading the Word About How to Make Schools Hunger-Free
NextDisability Insurance: An Essential Part of Social Security
Stay up to date
Receive the latest news and reports from the Center