It’s no secret that with unemployment much higher than usual during the recession, a growing number of Americans are receiving food stamps to help them afford an adequate diet. In fact, the number of food stamp recipients has jumped by about 13 million (50 percent) since the start of the recession. But you might not know that the Food Stamp Program has handled this increase while becoming even more efficient, as a new Center report shows. The Agriculture Department announced last month that, in 2009, the share of total food stamp payments that represent overpayments, underpayments, or payments to ineligible households reached an all-time low, 4.36 percent. The net loss to the federal government from payment errors — that is, the benefits lost through overpayments minus those saved by underpayments — was only 2.7 percent.
Image 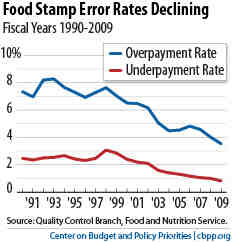 By comparison, the IRS estimates a noncompliance rate with federal taxes of at least 15 percent in 2001, which represents the loss of about $300 billion in federal revenues. As the chart shows, food stamp overpayments and underpayments have dropped significantly in the last two decades. The Food Stamp Program has one of the most rigorous quality control systems of any public benefit program — states with persistently high error rates receive financial penalties, for example — so taxpayers can have high confidence that it’s using public resources wisely.
Topics:
Food Assistance, Poverty and Inequality, Economy
PreviousThe Latest on the Estate Tax
NextIn Case You Missed It...
Stay up to date
Receive the latest news and reports from the Center