State revenues plummet in recessions as struggling households and businesses pay less in taxes, and it occurs just when states can least afford the loss (see chart).  Some states, including Louisiana, Nebraska, and North Carolina, have recently considered replacing state personal income taxes with sales taxes, in part to reduce this volatility.  But that switch wouldn’t solve the problem.  In fact, it would make the states’ tax systems more regressive (that is, fall harder on middle- and low-income people) and would reduce significantly the revenues available to fund schools and other public services — without improving volatility much. 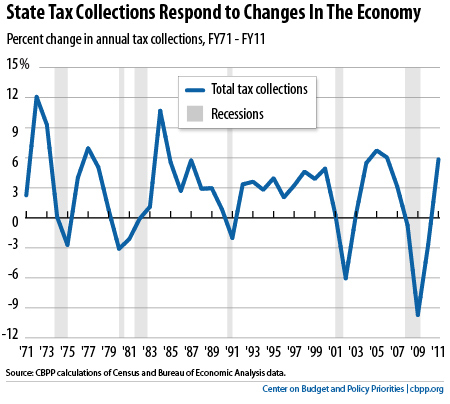 But states can better address revenue volatility with such strategies as stronger reserve funds and better mechanisms for managing budget surpluses, as we explain in a new paper.  Here are five strategies that states should put in place now — during an economic recovery — to prepare for the next recession.

How States Can Prepare for the Next Rainy Day

March 29, 2013
PreviousBenefits of the Earned Income Tax Credit Extend to the Next Generation
NextWant More Low-Income Workers to Have Health Coverage? Expand Medicaid.
Stay up to date
Receive the latest news and reports from the Center