Now that the Supreme Court has upheld the Affordable Care Act, we know that insurers will no longer be able to deny people coverage or charge them more based on their health status or gender, subsidies will be available to help people with low and moderate incomes afford coverage, and a state or federal exchange will be operating in every state in 2014.

A number of states are well on their way to establishing their own exchanges.  But many other states instead have dragged their feet, citing uncertainty prior to the high court’s ruling (see map).  With last Thursday’s decision, however, states can no longer use that excuse as grounds to avoid implementing the law.  States that have said they prefer to operate their own insurance exchanges (rather than have the federal government run the exchanges for them) must act quickly. 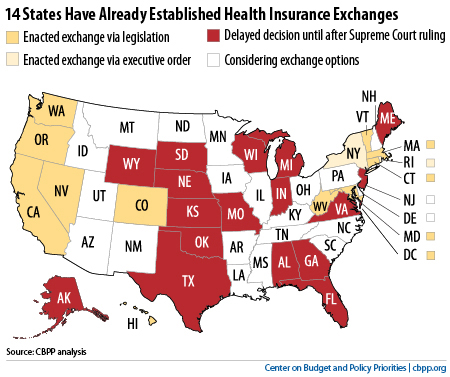 1. Deadlines are approaching – quickly. States must officially notify the Department of Health and Human Services (HHS) by November 16, 2012 – that is, in less than five months – of their intention to operate a state-based exchange and submit an application for federal approval of the exchange’s design and operations.

2. Applications alone won’t be enough. States seeking approval of their exchange proposal have to demonstrate sufficient progress to HHS by January 1, 2013 in order to prove that their state does not need a federally run exchange.

3. Operations will start before 2014. Exchanges – whether state- or federally run – will have to start enrolling individuals, families, and small businesses by October 1, 2013.  States operating an exchange will also need to ensure they can determine eligibility for federal premium and cost-sharing subsidies available to individuals with low and moderate incomes who will buy coverage through the exchange.  They also must be able to coordinate with their state Medicaid and CHIP programs.  This means that new and improved information technology systems must be developed and tested.

4. Key policy decisions will take time.  States must decide how they’ll approach and implement a wide variety of policies, such as financing operations of the exchange after 2014, selecting health plans to be sold in the exchange, conducting outreach and education to consumers, and developing services to attract small businesses.

5. Federal grant funds are available to fully fund states’ exchange set-up costs. States can apply for and receive federal funds that will finance all costs related to the design and launch of their exchanges.  The funds can be used to conduct research on their insurance market, develop or upgrade their IT systems, hire and train staff, as well as support all operating costs for the exchange’s first year.  The grants will be provided through 2014, as long as funds are available.  But the sooner states access the funds, the sooner they can put them to work – and increase their chances of meeting all of the important implementation deadlines.

Despite these factors, leaders in several states responded to the Supreme Court decision by continuing to delay their own decisions on whether to move forward and create a state-based exchange.  Because of the time crunch, this foot-dragging could effectively be a decision in itself – to forgo any chance of operating an exchange themselves and instead default to an exchange set up by the federal government.

The Unfinished War on Poverty