With the President’s new fiscal commission having its first meeting this morning, here are three basic points concerning the coming debate over our nation’s budget priorities. 1.  The United States faces crippling long-term deficits if we continue our current policies. (See Figure 1.) Reducing deficits in the short term would undercut the economic recovery.  But in the longer run, large deficits and rising debt will increase interest rates, crowd out private investment, reduce economic growth, and impair Americans’ standard of living.
Image

Also, the prospect of growing debt could cause investors to lose confidence in U.S. government securities and prompt a sudden financial crisis.

2.  The main causes of rising long-term spending are growing health care costs system-wide (public and private) and the aging of the population. (See Figure 2.) Together, these factors will drive up spending for the “big three” domestic programs:  Medicare, Medicaid, and Social Security.  Growth in those programs accounts for all of the projected increase in federal program (non-interest) spending as a share of the economy over the next 40 years and beyond.
Image 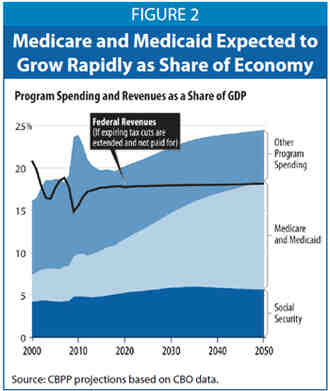 Total spending for all other programs — including all entitlement programs other than Social Security — is projected to shrink as a share of the economy in coming decades. 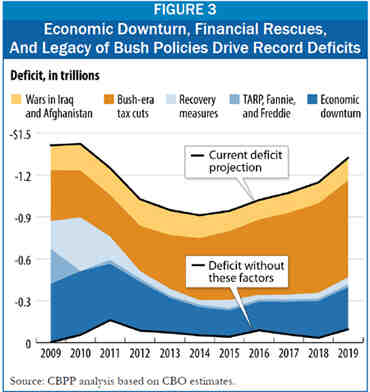 The deficit soared to a record $1.4 trillion in 2009 and will remain near $1 trillion a year for the next decade if we continue current policies.  But critics who blame President Obama for those large deficits are simply incorrect.

Two weeks before the President took office, the Congressional Budget Office projected that the deficit would top $1 trillion in 2009.  CBO also projected that deficits would average over $1 trillion a year in 2010-2019 if we continued current policies, such as extending the Bush-era tax cuts. Moreover, the temporary factors that will swell deficits over the next few years will soon fade.  The financial rescues that began in the fall of 2008 (TARP, Fannie, and Freddie) helped create 2009’s record deficit but will quickly shrink.  And the costs of the 2009 Recovery Act are heavily concentrated in 2009-2011, when the economy is weakest.  Because these policies are temporary, they won’t add significantly to long-term deficits. We’ll have much more to say on these issues in the weeks and months ahead.
Topics:
Federal Budget, Budget Outlook
PreviousThe Middle Class's Stake in Health Reform
NextDeficits and Debt: Reischauer’s Testimony is a Must-Read
Stay up to date
Receive the latest news and reports from the Center