In recent weeks, the already weak safety net for some of our most vulnerable citizens became substantially weaker.  For the first time since 1996 when President Clinton and Congress created the Temporary Assistance for Needy Families (TANF) block grant as part of welfare reform, no additional TANF funds are available from the federal government to help states respond to the large increases in the number of impoverished families as a result of a recession.  We’ve just issued an analysis on the topic. The federal cut-off in recession-related help to states is due to two factors: Aggravating these problems, the 17 states that have received Supplemental Grants every year since TANF was created (most of them relatively poor states) will see those grants cut by 33 percent this year, unless Congress provides additional funding to restore them to their original level. Due to these factors, states will have an average of 15 percent less federal TANF funding in fiscal year 2011 to help low-income families with children than they had on average in each of fiscal years 2009 and 2010.  All states except one (Wyoming) will experience some reduction in federal TANF funding this fiscal year, although some states will be hit harder than others (see map).  Some 28 states will experience a funding decline of 15 percent or greater, and four of these states will be subject to a reduction of 20 percent or greater.
Image 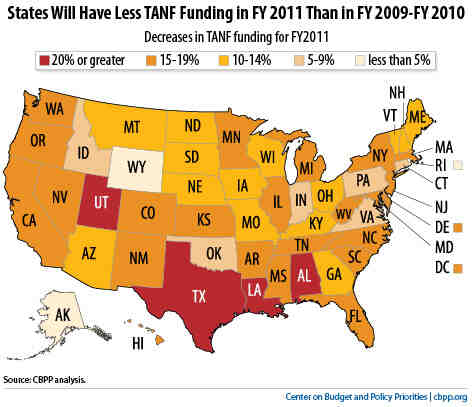 With the need for emergency and temporary assistance (including help finding work) at their highest levels in decades, these funding reductions will mean that very poor families will receive less assistance to cover their basic needs (South Carolina, Washington State, the District of Columbia, and Delaware have already adopted plans to cut TANF benefits).  In addition because the TANF Block grant is used to fund a broad range of services for low-income families with children more parents will go without jobs, more homeless families will go without shelter, fewer low-wage workers will receive help with child care expenses, and fewer families involved with the child welfare system will receive preventive services.
Topics:
Federal Budget, Poverty and Inequality, State Budget and Tax, Federal TANF Policy, TANF in the States, Family Income Support, Economy
PreviousThe big picture on the budget and taxes
NextSenate Funding Bill Getting a Bum Rap
Stay up to date
Receive the latest news and reports from the Center