Federal Debt Projections With & Without the Bush Tax Cuts

As Congress decides whether to extend the 2001 and 2003 tax cuts, we thought it might be useful to keep in mind what the federal debt would be with and without an unpaid-for extension. 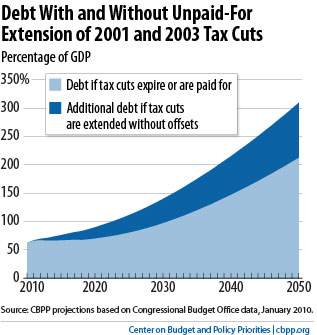 Clearly, extending the tax cuts without offsetting the cost would add significantly to federal debt in the long term.  By 2050, in fact, it would increase the debt by an amount roughly equal to the size of the economy, according to our long term projections.

Stabilizing the debt as a share of the economy will require both spending reductions and revenue increases.