| By Chuck Marr
Childless workers under age 25 are ineligible for the Earned Income Tax Credit (EITC), so young people just starting out — including low-income young men, who have disturbingly low labor force participation — receive none of its proven benefits like promoting work, reducing poverty, and supplementing low wages.  Meanwhile, childless workers aged 25 and older receive just a small EITC.  As a result — and unlike the members of any other group — the federal government taxes some childless workers into (or deeper into) poverty.
Image 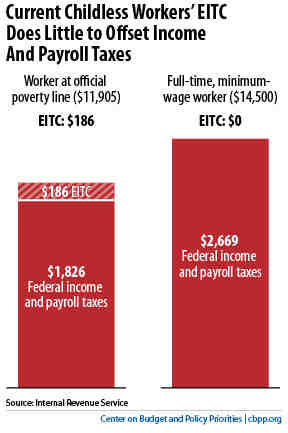 Proposals before Congress to expand the credit and make more childless workers eligible hold strong promise of increasing employment and reducing poverty. As our new paper explains and the graph shows: Bills before the House and Senate would substantially strengthen the EITC for childless workers.  Both would lower the eligibility age to 21, phase in the credit more rapidly so it fully offsets a poor worker’s payroll taxes, and raise the maximum credit from $487 to $1,350. By rewarding work, economists believe a larger childless worker credit would encourage greater employment, much as earlier expansions of the EITC did for single mothers. These proposals also would cut poverty among childless workers.  We estimate that they would lift more than 300,000 such workers out of poverty and reduce the severity of poverty for 3.8 million others, using the Census Bureau’s Supplemental Poverty Measure — which includes the cash value of tax credits and benefit programs such as SNAP (formerly called food stamps).
Related Posts:
Topics:
Federal Tax, Personal Taxes, Business Taxes, Tax Credits for Individuals and Families