Who stands to gain the most if Congress extends the middle-class Bush tax cuts:  a middle-income worker or a millionaire?  The millionaire (see graph).  That’s one more reason — on top of those listed here — why Congress shouldn’t add a trillion dollars in deficits and debt over the next decade by also extending the tax cuts exclusively for the richest 2 percent of families.
Image 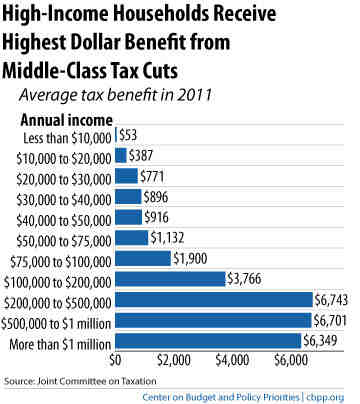 Here’s why wealthy households make out so well under the middle-class tax cuts.  The income tax operates as a staircase, not an elevator, so people who make $1 million a year don’t go directly to the top “floor” (i.e., to the top marginal tax rate, currently 35 percent) but instead take the “stairs,” paying tax on the first increment of taxable income at the bottom rate of 10 percent, paying tax on the next increment at 15 percent, and so on until reaching the top rate. As a result, the 2001 tax law’s reductions in the lower tax brackets benefit not only middle-income people whose incomes fall into those lower brackets, but also people in the very highest brackets. In fact, a family making more than $1 million will receive more than five times the tax cut benefit, in dollar terms, as a middle-class family making $50,000 to $75,000, if Congress extends the middle-class tax cuts. We’ll issue a report tomorrow that details how the different pieces of the middle-class tax cuts affect families at different income levels.  But the bottom line is that the wealthy are going to benefit from the Bush tax cuts even if Congress lets the large tax cuts aimed exclusively at them to expire.
Topics:
Federal Budget, Federal Tax, Budget Outlook, Personal Taxes, Business Taxes
PreviousCountdown Day 4: Top Ten Facts About Social Security
NextCountdown Day 5: Top Ten Facts About Social Security
Stay up to date
Receive the latest news and reports from the Center