As our new paper explains, the House Ways and Means Committee is scheduled to consider a bill this week to repeal the federal estate tax on inherited wealth, just one week after the House Budget Committee approved a budget plan calling for $5 trillion in program cuts disproportionately affecting low- and moderate-income Americans.

Repealing the estate tax would be highly misguided — especially in the context of the House Budget Committee plan, which would repeal health reform and cut Medicaid deeply, causing tens of millions of Americans to become uninsured or underinsured; cut the Supplemental Nutrition Assistance Program (SNAP, formerly known as food stamps), making it harder for millions of low-income families to put food on the table; and cut Pell Grants, raising the financial hurdle for people of modest means to attend college.  Despite these and hundreds of billions of dollars in additional cuts that were largely unspecified, the budget included no revenue increases.  And while concerns of future deficits supposedly drive the budget plan’s harsh cuts, repealing the estate tax would significantly expand deficits. 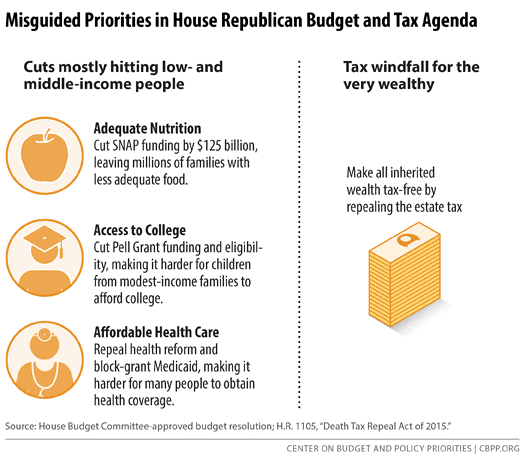 Evidence shows the estate tax is an economically sound tax.  Contrary to claims that the estate tax hurts the economy, it likely has little or no impact on wealthy donors’ savings, and it encourages heirs to work.  The estate tax is an economically efficient way to raise revenue that supports public services and lowers deficits without imposing burdens on low- and middle-income Americans.  The tax plays an important role in our revenue system, particularly given our long-term budget challenges. Click here for the paper.

Congressional Budget Roundup 2015: Everything You Need to Know About the House and Senate Budget Plans