A recent Jennifer Rubin column in the Washington Post cites an OECD report and some CBO data to make her case that:  “We can’t solve the debt problem by grabbing more money from the rich.”

Of course no one source of deficit reduction will “solve” our debt problem.  A closer look at these same sources, however, underscores that reversing President Bush’s tax cuts for the highest income people would make an important contribution to deficit reduction.

Take that OECD report.  It looked at the effect of government policies on the disparities of income in 24 OECD countries.  The study concluded that U.S. tax and spending policy (i.e., the whole budget) does less to diminish this inequality than the policies in any other of the studied countries except South Korea: 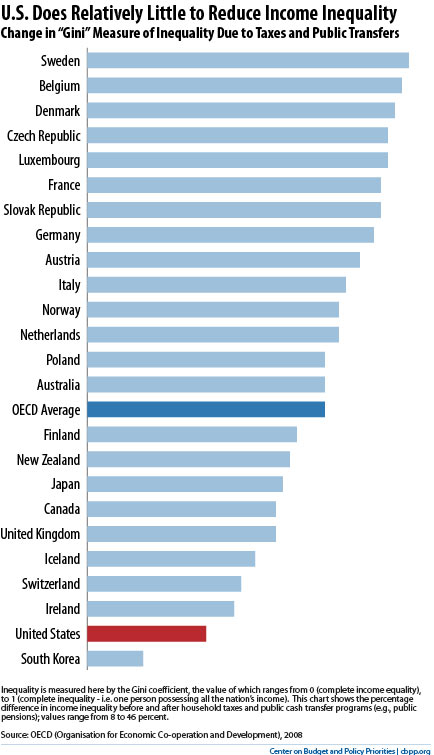 One consequence of this is that inequality of disposable income (i.e., after considering taxes and public transfers) is higher in the U.S. than in any other of these 24 OECD countries.  (Among all countries in the OECD, the U.S. had the fourth-highest level of income inequality as of the mid-2000s, after Mexico, Turkey, and Portugal.)

The same CBO tables that Rubin mentioned highlight just how dramatically taxes have been cut at the top end of the income scale.  In 1979, the top one percent paid an average federal tax rate of 37.0 percent.  After three decades of the supply-side experiment, that rate had fallen to 29.5 percent even as incomes were surging at the top and stagnating for working and middle class Americans. By 2007, the average household income in the top 1 percent was $1.3 million — or 74.6 times higher than those at the bottom — more than triple the rich-poor gap in 1979.

Consider if this policy of cutting taxes for the richest people were reversed and the average federal tax rate had returned to 37.0 percent, instead of the actual 29.5 percent, for 2007.  How much money would we be talking about?    Using CBO data, we estimate that additional revenue of roughly $180 billion in 2007 alone.  That would not “solve” anything, but that’s real money.

That’s why returning the tax burden on this top group to what it was in 1979 belongs at the center of the negotiating table.

May 12 Update: This post has been corrected to reflect the fact that the referenced 2008 study did not include all members of the OECD.  The data are from Figure 4.5 in the 2008 OECD report, and show all countries in the OECD-24 (www.oecd.org/els/social/inequality/GU).

Share
Facebook Twitter Print Email
PreviousIn Case You Missed It...
Next“Forward Funding” for Unemployment Insurance? Hardly
Stay up to date
Receive the latest news and reports from the Center