Education Jobs on the Rebound

Today’s jobs report shows that schools are starting — finally — to recover from the effects of the recession.  But the news isn’t so good for other state and local workers. 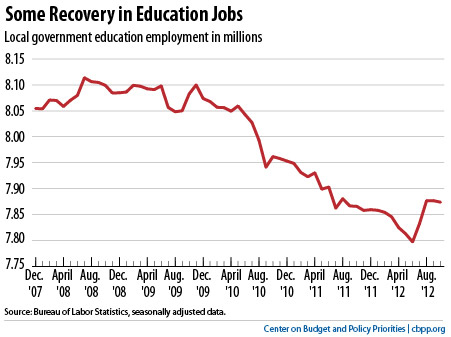 When school districts hire back teachers and other education workers, that helps not only students but also state economies, since those workers will have more money to spend at local stores.

Public universities and other state-level education employers are also hiring.  They’ve added 46,000 jobs since June, improving the chances that today’s college students will get the needed instruction that prepares them to enter the workforce and excel.

In contrast, the number of state and local jobs outside education — police and firefighters, child abuse caseworkers, public health employees, courtroom employees, and so on — has dropped by 31,400 since July 1, when this state fiscal year began in most states.  That’s on top of the 401,000 jobs lost over the previous four fiscal years.

The jobs report figures are periodically revised as additional data become available, so today’s numbers will likely change somewhat.  But while schools still have a ways to go to recover from the recession, they appear to have turned a corner.  More layoffs for other public employees, on the other hand, continue to slow the recovery.

Unbalanced Deficit-Reduction Package Would Slash Funds to States and Localities

September 28, 2012
PreviousToday's Jobs Report in Pictures
NextMore on the Myth of the Exploding Safety Net
Stay up to date
Receive the latest news and reports from the Center