Economic Growth Picked Up in Third Quarter, but Remains Far Below What Is Needed

| By Chad Stone
The economy expanded at a 2.5 percent annual rate in the third quarter of 2011, according to today’s preliminary report from the Commerce Department.  That’s an improvement over the dismal pace in the first half of this year (see first chart), but growth will have to be much stronger to dig the economy out of the deep hole created by the Great Recession (see second chart) and bring unemployment down to acceptable levels.
Image 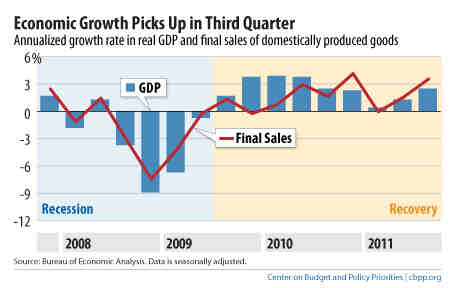 The good news about today’s GDP report is that the economy has been growing for nine straight quarters and grew faster in the third quarter than it did in the first half of the year.  Final sales of goods and services — a better measure of underlying demand than GDP — grew at a 3.6 percent annual rate.  Strong growth in final sales can be a harbinger of a coming pickup in GDP growth, although that didn’t happen following the jump in final sales in the fourth quarter of last year.
Image 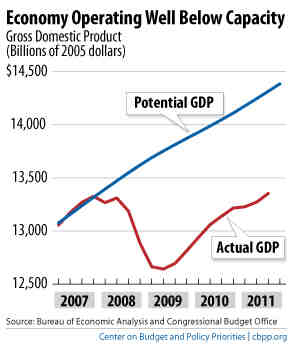 The bad news in today’s report is that the economy has only just gotten back to the level of GDP at the start of the recession, nearly four years ago, and continues to operate well below full capacity.  Actual GDP is a gaping 6.7 percent less than potential GDP (what the economy is capable of producing with full utilization of workers and business capacity). The economy needs to grow faster to close the gap between actual and potential GDP and put people back to work.  Measures like those that the President proposed in the American Jobs Act — a payroll tax cut, continued federal unemployment insurance, infrastructure investment, and aid for state and local governments — are the right medicine on the fiscal side.  Additional stimulus measures by the Federal Reserve are warranted on the monetary side.
Topics:
Federal Budget, Economy