| By Chad Stone
“It could’ve been a lot worse” may not be a winner as a political message, but it’s the right response when people complain that the TARP financial stabilization bill and the 2009 Recovery Act didn’t work. This chart, based on new data on gross domestic product (GDP) released this morning, shows the turnaround in the economy since Congress enacted these measures.
Image

How do we know the economy wouldn’t have turned around anyway? We can’t re-run history to find out, of course, but this econometric analysis by former Federal Reserve Vice Chairman Alan Blinder and Mark Zandi of Moody’s Economy.com shows that things could have gotten pretty scary with no policy response. As Blinder and Zandi say, the government’s policy response “probably averted what could have been called Great Depression 2.0.”
Image 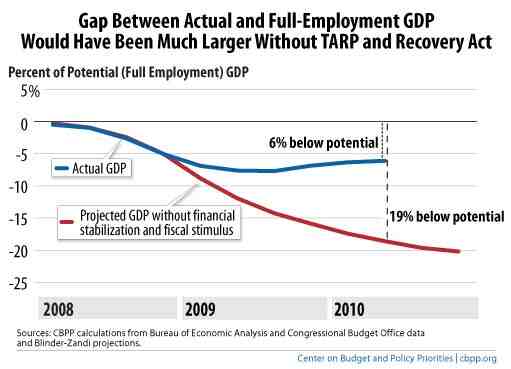 Regardless of what the polls say, the facts are that the financial stabilization and fiscal stimulus worked the way they were intended to. The economy stopped its steep slide and has begun to turn around. Does that mean the job is done? Not by a long shot. Today’s report shows that GDP growth slowed to a disappointing 2.4 percent in the second quarter. That’s barely enough to keep up with growth in the economy’s potential to produce goods and services stemming from labor force and productivity increases. Growth of 4 percent or better is needed to get the economy moving back toward full employment. Thus far, unfortunately, misguided opposition has delayed (in the case of extra weeks of unemployment benefits) or prevented (in the case of extended state fiscal assistance) further job-creating stimulus.
Topics:
State Budget and Tax, Economy

Share
Facebook Twitter Print Email
PreviousMore on the TANF Emergency Fund
NextIn Case You Missed It...
Stay up to date
Receive the latest news and reports from the Center