Congress is back in session and will consider extending the parts of last year’s Recovery Act that have provided extra weeks of jobless benefits and aid to cash-strapped states.  The graphs below show why it needs to do both.

While recent data suggest that job losses and state revenues may have bottomed out, both are in deep holes and will continue to cause serious problems for the economy unless Congress acts to cushion the blows.

Let’s take these problems one at a time.

First, states are facing a historic drop in revenues, as the graph shows.  To keep their budgets in balance, states and localities are cutting deeply — with disastrous results for services and jobs.  Some 900,000 public- and private-sector jobs could be lost in the coming year if states have to close their entire shortfalls without additional federal help. 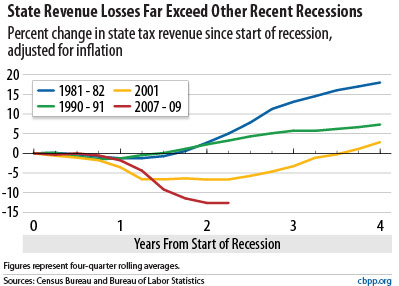 A new Rockefeller Institute of Government report noted a slight uptick in revenues for the January-March period but explained that it was only because California and New York raised tax rates and “does not indicate broad fiscal recovery.”  States’ underlying tax base remains far below pre-recession levels.  So there’s still not enough revenue to meet states’ responsibilities in areas like health care and education.

Second, it’s the same story on unemployment.  The economy is starting to add jobs, but as the graph below shows, we’ve got a long, long way to go to close the huge jobs deficit that the recession has created.

Share
Facebook Twitter Print Email
PreviousQ & A: New Fiscal Year Brings More Tough Times for States
NextWhere Have All the Millionaires Gone?
Stay up to date
Receive the latest news and reports from the Center