Despite Promises, Tax Breaks Not Expanding Health Coverage in Georgia

Georgia in 2008 enacted tax breaks to expand health coverage by encouraging people to buy high-deductible insurance plans that they could pair with a Health Savings Account (HSA).  Newt Gingrich’s Center for Health Transformation designed and promoted the law, claiming that 500,000 Georgians would gain health coverage using the tax breaks.
Image 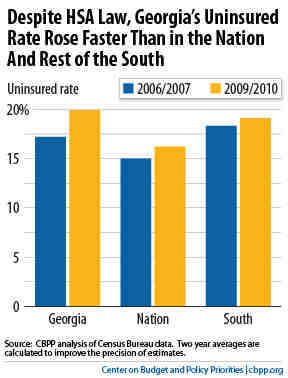 But, as our new analysis shows, these claims didn’t hold up.  Georgia’s uninsured rate has gone up since then, not down, and at a faster rate than in the region and the country as a whole (see chart). Some policymakers have called for repealing the Affordable Care Act and have promoted HSAs as one of the alternative ways to expand coverage.  Our new report’s findings (which are consistent with our 2008 analysis of the Georgia law) cast serious doubt on that approach: These findings reinforce earlier studies on the limitations of federal tax breaks related to HSAs.  These studies have shown that HSAs mostly benefit high-income people — the group that is least likely to be uninsured.  That’s not surprising since the higher a person’s federal income tax bracket, the greater the value of the benefit. The Affordable Care Act will cover 34 million Americans who would otherwise be uninsured, according to the Congressional Budget Office.  Georgia’s experience provides some further evidence that promoting HSAs is not a viable alternative.

Topics:
Health Reform, Coverage Trends, Health
PreviousToday's Job's Report in Pictures
NextLocal Governments Still a Drag on the Economy
Stay up to date
Receive the latest news and reports from the Center