Deficit Reduction Should Not Increase Poverty or Inequality

| By CBPP
In his Senate Finance Committee testimony today, Robert Greenstein explained that history shows policymakers can reduce deficits without worsening the nation’s already high levels of poverty or inequality:

The United States has higher degrees of poverty and inequality than most other Western industrialized nations.  Deficit reduction ought not to make these problems worse.  (The United States also has more modest retirement benefits and larger burdens from out-of-pocket health costs than most other Western nations.)  Erskine Bowles and Alan Simpson made the need to protect the disadvantaged and to avoid increasing poverty and inequality (see graph) one of the fundamental principles of their commission’s work. 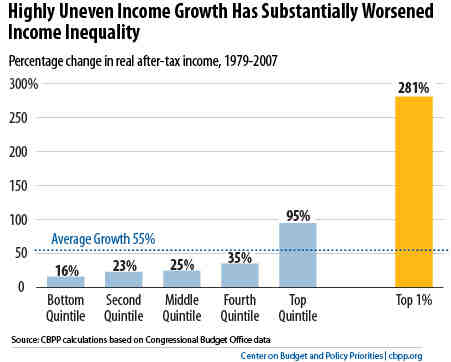 History shows this principle can be honored if there is a will to do so.  The three major deficit-reduction packages of the last two decades — the 1990, 1993, and 1997 packages — all adhered to this principle.  (In fact, all three of these packages reduced poverty and inequality even as they shrank deficits, as a result of their inclusion of increases in the Earned Income Tax Credit in the 1990 and 1993 packages and in food stamps in the 1993 package, and the creation of the Children's Health Insurance Program as part of the 1997 package.)  This principle was also reflected in the Gramm-Rudman-Hollings law, the Budget Enforcement Act of 1990, and last year’s Pay-As-You-Go law — all of which exempted means-tested entitlement programs from the automatic across-the-board cuts triggered when deficit targets were missed or pay-as-you-go standards were violated. Click here for the full testimony.
Topics:
Federal Budget, Budget Outlook, Budget Process, Inequality Trends