Cutting Workers’ Jobless Benefits Would Hurt Them and the Economy

| By Michael Leachman
The Wall St. Journal editorialized yesterday in favor of a bill that would renege on the federal government’s commitment to provide unemployment insurance (UI) benefits through December to Americans who have been looking for work for more than six months.  That would impose added hardship on those families and slow the economic recovery by reducing overall consumer demand. The Journal’s case for the bill simply doesn’t hold up. The bill, from House Ways and Means Chairman Dave Camp and Senate Finance Committee Ranking Member Orrin Hatch, would transfer the $31 billion that the federal government is estimated to spend on long-term UI benefits through 2011 to the states.  States could use the money to continue long-term UI benefits or for other things, like repaying the federal money they borrowed to pay for UI benefits when their UI trust funds ran out in the recession.  (Twenty-nine states have outstanding federal loans.)  Camp-Hatch would also lift a moratorium that prevents states from reducing their UI benefit levels in 2011.  (See here for our full analysis of the bill.) The Journal claims that many state UI trust funds are in debt to the federal government because federal law bars states from cutting UI benefit levels or reducing access to the program by changing eligibility rules. That’s wrong in several ways. State UI systems are in financial trouble largely because most states have kept the employer tax that pays for UI benefits artificially low over the past two decades.  Among other things, many of them failed to adjust their “taxable wage base” — the amount of a worker’s earnings on which the UI tax is levied — to fully account for inflation and wage growth over time.  As a result, the share of wages that are subject to UI taxes has declined sharply (see graph).
Image 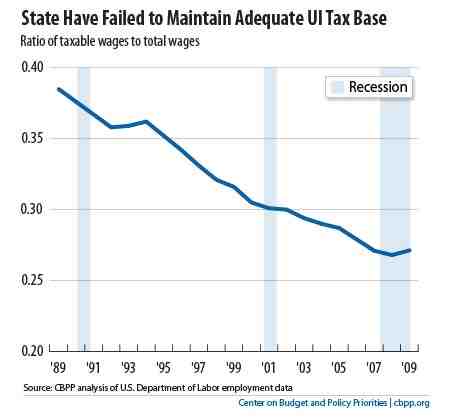 States in general have become less well prepared for each successive recession. When the current economic downturn began in December 2007, total state UI trust fund reserves equaled just 0.8 percent of total wages — compared to 1.5 percent of wages prior to the 2001 recession and 1.9 percent of wages prior to the 1990-91 recession. With reserves so low, state UI systems weren’t prepared for even a moderate recession, much less the Great Recession of 2007-09. As for the Journal’s claims: Camp-Hatch would let off the hook those states that failed to prepare adequately for the recession. It would grant them large sums that they could use to pay down debt in their UI trust funds without requiring them to strengthen their UI financing systems to prepare better for future recessions.  Many states likely would accept their federal windfall while continuing to ignore their long-term financing problems.  That’s not a responsible plan. As our analysis explains, there are ways to help states prepare for the next recession while protecting UI benefits for workers and their families.  Camp-Hatch fails on both counts.
Topics:
State Budget and Tax, Economy