Critical Assistance That Ended Too Soon

Our new analysis of state budget data shows that emergency federal assistance during the Great Recession enabled states to avert many spending cuts or tax increases that would have further harmed a weak economy — but ended well before the need did. The 2009 Recovery Act and an extension enacted the following year included about $156 billion (mostly for Medicaid and education) to help states offset the collapse in revenues and the higher need during the recession.  These funds closed an average of one-third of state budget gaps in state fiscal years 2009-2011.
Image 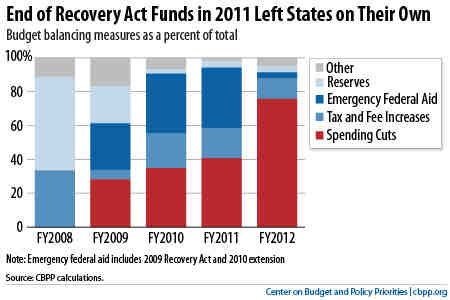 But the emergency assistance mostly ended by June 2011, when state revenues were still about 7 percent below pre-recession levels, on average. With federal aid mostly gone and state reserve funds largely depleted, states had to rely almost exclusively on spending cuts and tax increases to keep their budgets in balance.  They primarily chose to cut spending:  states closed 76 percent of their 2012 shortfalls through spending cuts, nearly twice the previous year’s 40 percent share (see graph). More federal aid and a more balanced state approach — one that relied equally on new revenues and on service cuts — would have served states better.  As I noted yesterday, state and local governments have shed hundreds of thousands of jobs since 2008 and cut back on core services like education and health care, slowing state economies in the short term and potentially over the long term as well. States have faced large budget gaps again in crafting their budgets for next year and even more gaps are likely in coming years, but federal policymakers are far more likely to cut ongoing federal funding for states and localities than to give any additional assistance, thereby making state budget challenges even greater.

Topics:
State Budget and Tax
PreviousYes, Health Reform Strengthens Medicare and Reduces the Deficit
NextIn Case You Missed It...
Stay up to date
Receive the latest news and reports from the Center