As I explained recently, corporations have launched a massive lobbying campaign for another temporary tax holiday for overseas profits they bring back to this country.  Part of their pitch has been that it would effectively be a “free lunch” for taxpayers.  Today, the cost of that supposedly “free” lunch went way, way up.

Before Congress enacted the first such holiday in 2004, the Joint Committee on Taxation (JCT) estimated it would cost $3 billion over ten years.  When some lawmakers proposed a second holiday in 2009, the cost estimate shot up to $29 billion as JCT saw how much more profits corporations were shifting overseas.

JCT today estimated the cost of a new holiday at $79 billion over ten years.  Revenues would go up slightly in the first few years as corporations took advantage of the holiday to “repatriate” foreign earnings at a much lower tax rate, but large revenue losses in later years would more than wipe out those gains as corporations aggressively shift more jobs and income overseas in anticipation of another temporary holiday (see graph). 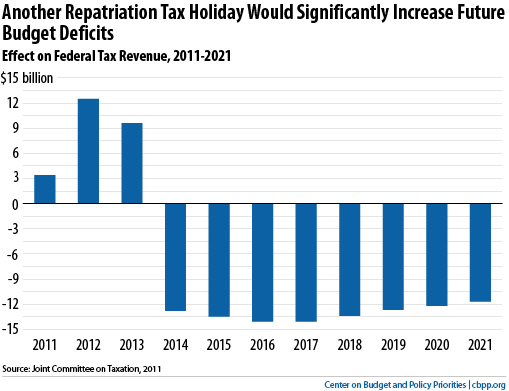 The Joint Tax analysis also bolsters the central arguments against another holiday: