Cold Turkey — and Cold Holidays — for the Unemployed

Over 1.2 million Americans will face a cutoff in unemployment benefits in December if Congress (which returns to work for a week in mid-November) does not extend the emergency unemployment insurance program for the long-term unemployed before it goes home for Thanksgiving, according to a recent report from the National Employment Law Project. The map below shows the number of weeks of benefits now available in each state (click here for details): 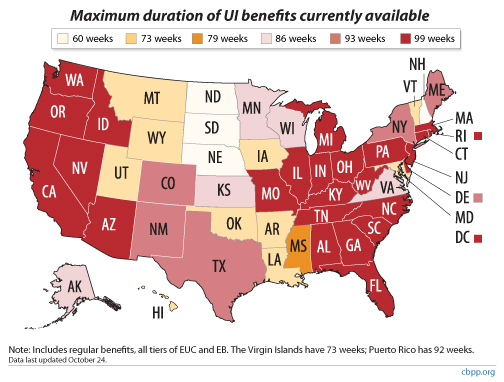 If Congress fails to extend the emergency program before its November 30 expiration, the number of available weeks will drop significantly:
Image

According to the NELP report, which includes state-specific estimates, the 1.2 million affected workers consist of:

Unemployment benefits are the only form of income for many workers who are out of work and looking for a job. Cutting off their benefits right at the start of the holiday season would be painful not only for them and their families, but also for local businesses — whose biggest single problem lately, as the New York Times’ Economix blog has noted, has been weak sales.

Topics:
Economy
PreviousIn Case You Missed It...
NextDesigning the New Health Insurance Exchanges
Stay up to date
Receive the latest news and reports from the Center