Child Poverty Up in Most States, with Damaging Consequences

We reported last week that, in 40 states, the share of the population below half the poverty line increased between 2007 (when the recession hit) and 2010.  Today, we note that child poverty is also up in the vast majority of states.  Census data released last week show that:
Image 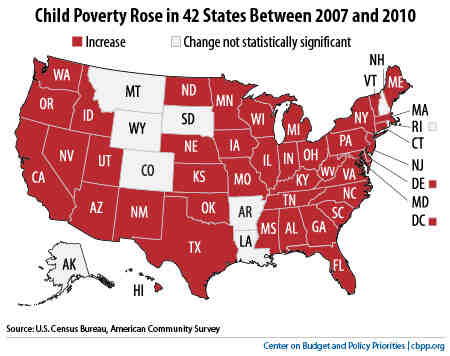 It’s unlikely that hardship among children has eased since 2010.  Not only has unemployment remained high, but our analysis of state budgets for the fiscal year that began in July showed states making unnecessarily deep and harmful cuts to supports for our most vulnerable families, on top of the widespread cuts that states have made since the recession began. Some states cut unemployment benefits that help keep families afloat in bad economic times.  Others cut state earned income tax credits that boost income for low-earning families or cash assistance to the poorest families. Many states also have cut back the kinds of investments that can help give children from disadvantaged families a better shot at a more prosperous future, such as improved access to preschool programs and higher education. We know that poverty diminishes children’s success in school, and more recent evidence confirms that it can even dampen their earnings as adults. The rising share of children growing up in poverty undermines one of the key ingredients to a strong economy and shared prosperity:  our human capital.
Image

Topics:
Poverty and Inequality, State Budget and Tax, Family Income Support
PreviousIn Case You Missed It...
NextMillionaire Myths, Indeed
Stay up to date
Receive the latest news and reports from the Center