I explained earlier this month that a recent report from some congressional Republicans grossly exaggerates state Medicaid costs under health reform.  Now, in a new analysis, I examine the report’s problems in more detail.

The non-partisan Congressional Budget Office has found that health reform’s Medicaid expansion is a good deal for states.  Medicaid and the Children’s Health Insurance Program will cover an estimated 18 million more low-income adults and children than they do today, most of whom are now uninsured.  The federal government will pay 92 percent of the cost of this expansion through 2021.  The cost to states over this period will be $60 billion — just 2.6 percent more than what they would have spent on Medicaid without health reform. 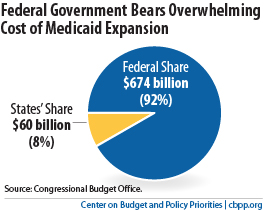 So how could the recent Republican report, authored by Senator Orrin Hatch (R-UT) and Rep. Fred Upton (R-MI), claim that states’ cost will be $118 billion through 2023?  By cherry-picking worst-case scenarios from various studies, many of them severely flawed.  The report does not try to standardize, or even assess the reliability or plausibility, of the various state estimates.  And whenever a range of estimates is available, the report uses the estimate at the top of the range without even mentioning that lower estimates exist.

For 19 states, the report relies on state-by-state cost estimates from an Urban Institute analysis.  But whereas the Urban analysis provided two sets of estimates for each state — one that assumes little change in the state’s Medicaid participation rate and one that assumes a sharp increase — the Hatch-Upton report cites only the higher estimate and doesn’t mention the other estimate, whose costs are only about half as high.

For the 31 other states, the Hatch-Upton report uses estimates produced by the states themselves.  A number of them assume Medicaid participation rates that are well above what any state has ever experienced; those for California, Florida, Mississippi, Indiana, and Nebraska, for example, assume that literally everyone who becomes eligible will enroll.

Some other state estimates overstate the per-person cost of covering newly enrolled Medicaid beneficiaries.  In a few cases, the estimate is well above what the Urban Institute — using the state’s own data — claims it costs the state to cover its current Medicaid population.

And some of the state estimates include costs not required under the Affordable Care Act, such as the cost of raising Medicaid’s payment rates for primary care to Medicare levels after 2014.

Finally, none of the studies on which the Hatch-Upton report is based take into account the state savings that will result from health reform’s dramatic reduction in the number of uninsured.  States and localities spend over $10 billion per year on hospital care for the uninsured and around $15 billion a year on mental health programs.  Under health reform, Medicaid will cover many of those services, so the federal government will pick up much of the costs of a number of services for which states now are bearing all of the cost.  In fact, Urban Institute analysts have pointed out that the reductions in state costs in caring for the uninsured could more than offset the state costs of expanding Medicaid.

As I’ve said before, the Medicaid expansion is a good deal for states.  Reports that claim otherwise are simply not credible.