CBO Says Mind the Gap, But Mind the Recovery Too

The Congressional Budget Office’s new long-term budget outlook contains few surprises.  It reiterates the argument that it and others (including us) have made previously — that policymakers should get down to the business of gradual deficit reduction, but without jeopardizing the economic recovery.

CBO finds that current budget policies will generate an unsustainable rise in federal debt.  If we follow current law, CBO estimates federal debt held by the public will rise from 62 percent of gross domestic product (GDP) at the end of 2010 to 84 percent in 2035.  But that assumes policymakers will let the Bush tax cuts (and other temporary measures) lapse on schedule, let the Alternative Minimum Tax (AMT) expand to the point where it will eventually snare half of all households, and let large scheduled cuts in Medicare payments to doctors take place.

If, instead, we follow current policy (not current law) and don’t let those things happen, the public debt will rise into uncharted territory, hitting 187 percent of GDP in 2035.  (The highest debt-to-GDP ratio we ever posted was 109 percent, at the end of World War II.) 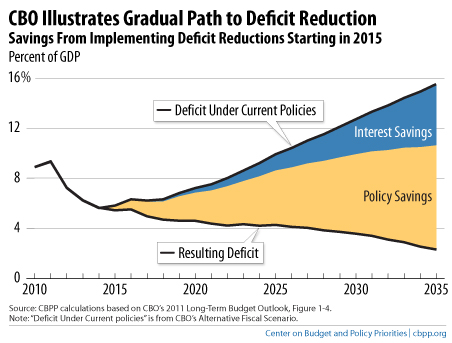 CBO’s new numbers don’t differ much from last year’s.  In June 2010, CBO estimated that debt would reach 185 percent of GDP in 2035 under current policies; now it pegs that figure at 187 percent.  (For the current-law baseline, the number has edged up from 79 percent to 84 percent.)  The numbers are worse in the near term — largely because of last December’s tax package, which extended the Bush tax cuts for two years, enacted a temporary payroll-tax holiday, and aided the unemployed — but those temporary measures do little harm to the long-term outlook.

CBO says the “fiscal gap” over the 2011-2035 period — that is, how much the government would have to raise revenues, cut non-interest spending, or some combination of the two each year to make the national debt in 2035 the same as a share of GDP as it was in 2010 — is 4.8 percent of GDP.  That’s equivalent, notes CBO, to slashing this year’s budget by over $700 billion.

But there’s no need to act so precipitously and endanger the economic recovery.  CBO illustrated a hypothetical path to reducing deficits sufficiently to close the fiscal gap that would start modestly — with cuts equal to 0.4 percent of GDP (about $60 billion in today’s terms) in 2015  — and rise to 8.4 percent of GDP (about $1.3 trillion in today’s terms) by 2035.  (See graph.) That gradual approach is compatible with a package of tax increases that wouldn’t derail the recovery, plus gradual reforms to pension and health-care programs that would protect people now in or near retirement while we learn more from the cost-control pilot programs and demonstrations of the Affordable Care Act.  And it would set off a virtuous cycle of lower interest costs.

Share
Facebook Twitter Print Email
PreviousChad Stone on the Fallacy of “Spend Less, Owe Less, Grow the Economy”
NextJared Bernstein on Helping the Middle Class
Stay up to date
Receive the latest news and reports from the Center