The Trump Administration has said that it wants to help communities address the nation’s serious housing affordability challenges, but the President’s 2021 budget would do the opposite, slashing housing assistance and community development aid next year by $8.6 billion, or 15.2 percent (not counting the impact of inflation).

The President last fall reportedly called for a “crackdown” on homelessness in Los Angeles and threatened federal intervention, seemingly intending to abandon proven, evidence-based strategies to help reduce homelessness. More recently, the Administration defended its proposal to roll back the enforcement of communities’ fair housing obligations by declaring that expanding the supply of affordable housing would better advance such goals.

But, for the Department of Housing and Urban Development (HUD) — much like in the President’s first three budgets — the budget proposes massive cuts in rental housing aid, which would leave hundreds of thousands more seniors, families with children, and other low-income households struggling to afford their rent and, in turn, likely worsen homelessness.

The need for more housing affordability resources, not fewer, is striking. Some 11 million renter households pay more than half their income for rental costs, and more than half of these households have incomes of less than $15,000 per year. Meanwhile, only 1 in 4 eligible low-income households receives rental assistance due to funding limits. Those that do get assistance find it a critical resource. Housing vouchers and other HUD rental aid are key to reducing homelessness; the HUD-Veterans Affairs Supportive Housing voucher program, for instance, has reduced veterans’ homelessness by 50 percent since 2010. (See chart.) More broadly, HUD’s rental assistance programs account for more than half of the affordable rental housing available to extremely low-income households. 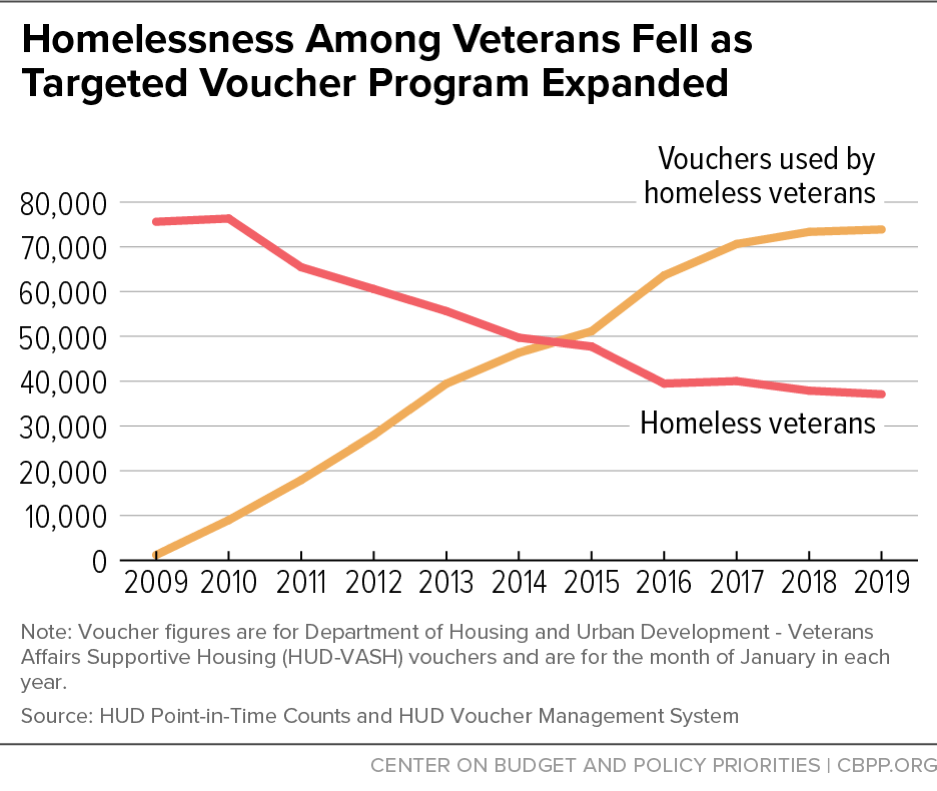 The HUD budget contains a few positive proposals. It would increase funding by $70 million to reduce lead hazards in housing, and by $60 million for initiatives that promote employment and increased earnings among assisted residents, in particular the Family Self Sufficiency and Jobs-Plus programs. It also proposes $110 million to modestly expand affordable housing for seniors and people with disabilities through the Section 202 and 811 programs, respectively. But its $80 million in cuts to housing assistance for people with HIV/AIDS, together with housing voucher cuts, would significantly reduce the number of seniors and people with disabilities receiving rental assistance.

Congress should reject this budget and instead continue to make strong investments in proven strategies to address the nation’s housing needs.

Commentary: We Need Rental Assistance and Services, Not Punitive Policies, to End Homelessness