Economic growth has slowed sharply this year, according to the Commerce Department’s initial estimate of gross domestic product (GDP) in the second quarter and its revised estimates for previous quarters (see first chart).   This should be a wake-up call to policymakers who think the recovery is strong enough to withstand the risks associated with either a default on government debt or the sharply contractionary effects of large, immediate cuts to government spending.

Although the recession technically ended two full years ago, the economy remains in a slump, with sluggish growth, high unemployment, and substantial excess capacity to produce goods and services.

Growth since the recession has been even more tepid than after the last two, relatively mild, recessions (1990-91 and 2001), and nothing like the growth that followed the deep 1981-82 recession (see chart).  That’s particularly disturbing because until now, deep recessions have tended to be followed by robust recoveries.

Because the recent recession was deep and the recovery has been weak, there is still a huge “output gap” between what the economy is producing (actual GDP) and what it could produce with full employment and full utilization of the nation’s productive capacity (potential GDP).

Moreover, actual GDP has to grow at the same rate as potential GDP just to keep the output gap from widening and unemployment from increasing, but we’re far short of that right now.  Actual GDP grew at a 1.3 percent annual rate in the second quarter (and an even worse 0.4 percent in the first quarter), well below the 2¼ to 2½ percent annual growth in potential GDP. 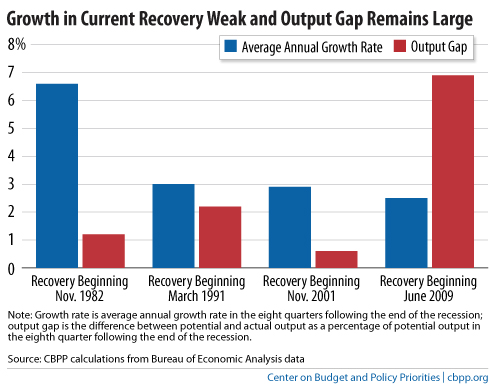 Clearly, the economy would benefit from additional monetary and fiscal stimulus to boost demand and lower unemployment.  But the Federal Reserve has taken its foot off the monetary policy accelerator by stopping its asset purchase program known as QE2, which aimed to push down longer-term interest rates.  And Congress is threatening to slam on the fiscal policy brakes by sharply cutting federal spending in order to reduce deficits.

The phase-out of the Recovery Act measures enacted in early 2009 (which had their maximum impact in mid-2010) is already a drag on growth, and the scheduled expiration at the end of this year of the payroll tax cut and federal emergency unemployment insurance (UI) benefits enacted at the end of 2010 would exert a further drag in 2012.

We need to reverse course and give the economy the boost it needs to promote a strong and sustainable recovery.  Lawmakers should raise the debt ceiling immediately, while continuing serious negotiations to craft a long-term deficit reduction plan that will not endanger the recovery by cutting the deficit too much too fast.  The Fed should reconsider its reluctance to make further asset purchases.  And lawmakers should enact short-term policies — such as extending emergency UI benefits into next year — that can sustain job-creating aggregate demand.

Share
Facebook Twitter Print Email
PreviousGreenstein: Both Balanced Budget Amendments Before House Would Threaten Full Faith and Credit of U.S.
NextIt’s Raining, So States Should Use Their Rainy Day Funds
Stay up to date
Receive the latest news and reports from the Center