In delivering the Republican Party’s weekly address on Saturday, Kansas Governor Sam Brownback made the rosy claim that states can cut taxes deeply without hurting their schools and other investments in the future, and he used his state as an example.  But the governor’s claim is too good to be true — and his own state proves it. 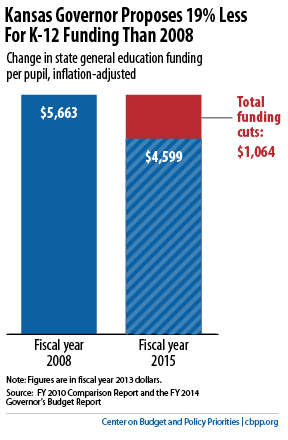 Funding for education in Kansas will likely continue to decline, thanks to the massive income tax cut that Governor Brownback signed last year.  That tax cut, which slashed taxes for the wealthy and profitable corporations while raising them for low-income seniors and families, drained $700 million from the resources available to fund education and other services.  The legislature’s research arm says that, starting in 2014 as a result of the tax cut, revenues will fall far short of what it would cost to maintain funding for schools and other state services at current levels ? levels that already reflect the aforementioned cuts in funding for K-12 schools and for higher education.

Despite proposing to raise other taxes to offset the impact of last year’s tax cut and help balance the budget, Governor Brownback proposes cutting per-student K-12 school funding by about another 5 percent by 2015, after adjusting for inflation.  He also has called for gradually eliminating income taxes altogether, without explaining how Kansas could afford to do so.

Citing the budgetary damage from the tax cuts, a state district court found in January that Kansas is unconstitutionally underfunding its elementary and secondary schools.

March 19, 2013
PreviousGreenstein on the Obama Budget
NextA Closer Look at the President's Budget
Stay up to date
Receive the latest news and reports from the Center