| By Chye-Ching Huang
“Without new revenues, safe and sane deficit reduction is impossible,” the New York Times asserts today.  We agree. To date, spending cuts have accounted for the bulk of the policy savings enacted to shrink deficits.  On the spending side, Congress has enacted several pieces of legislation — most notably the 2011 Budget Control Act — that will cut discretionary funding by nearly $1.5 trillion over the 2013-2022 period.  On the revenue side, January’s “fiscal cliff” deal — the American Taxpayer Relief Act (ATRA) —will generate an estimated $561 billion in additional revenue over 2013-2022.
Image 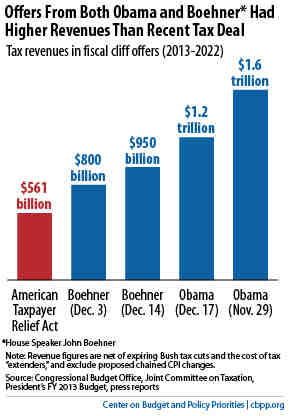 When you include the related interest savings, these measures will cut deficits by a total of $2.75 trillion over the new ten-year budget window of 2014-2023. We estimate that $1.5 trillion in additional deficit reduction over 2014-2023 would stabilize the debt at about 73 percent of GDP over the coming decade.  Stabilizing the debt means that the debt doesn’t grow faster than the economy and risk eventual economic problems. With ATRA’s enactment, Republican congressional leaders have said that new revenue is now off the table.  But it would be difficult to achieve well over $1 trillion in additional policy savings through spending cuts alone without worsening poverty and inequality, increasing the ranks of the uninsured, or jeopardizing investments important to future economic growth such as education, infrastructure, and basic research. Also, it’s important to note that during the “fiscal cliff” negotiations, every public offer from both the President and congressional Republicans included much bigger revenue increases than ATRA’s $561 billion (see chart).
Related Posts:
Topics:
Federal Budget, Federal Tax, Budget Outlook, Personal Taxes, Business Taxes