Policymakers need to replenish funding for the Disability Insurance (DI) program — a vital part of Social Security — by late 2016 to avert a sudden, one-fifth cut in benefits to a group of severely impaired and vulnerable Americans.  Some critics claim that replenishing DI by reapportioning payroll taxes between the DI and retirement trust funds would jeopardize retirees, but that’s not the case, as our new paper explains.

Reallocating the shares of payroll taxes that go to the separate DI and Old-Age and Survivors Insurance (OASI) trust funds is a traditional and noncontroversial way to even out the programs’ finances.  Lawmakers have enacted 11 such shifts, in both directions. 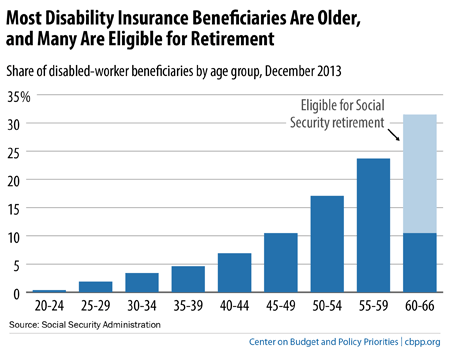 Neutral experts like the American Bar Association and the National Academy of Social Insurance, as well as retiree advocates like AARP and the National Committee to Preserve Social Security & Medicare, agree that reallocating payroll taxes is necessary and reasonable.

Policymakers should do so by 2016 to avert an unacceptable cut in DI benefits while working on the main goal:  ensuring solvency for all of Social Security.

August 13, 2014
Previous“Tax Extenders” Package Even Worse Than First Appeared
NextSix Ways Health Reform Helps the Middle Class
Stay up to date
Receive the latest news and reports from the Center