House Speaker Boehner and Senate Minority Leader McConnell called this week for a major change in health reform’s requirement that larger employers offer health coverage to employees who work 30 or more hours a week or face a penalty.  Claiming that the 30-hour threshold is “an arbitrary and destructive government barrier to more hours,” they propose raising it to 40 hours.  In reality, however, that step would lead to fewer hours and more part-time work — the exact opposite of what their rhetoric about “restoring” the 40-hour work week implies.

Critics of health reform claim that employers are shifting some employees to part-time work to avoid offering them health insurance.  But the data provide scant evidence of such a shift.

Moreover, raising the threshold for mandating coverage from 30 to 40 hours would make a shift toward part-time employment much more likely — not less so. 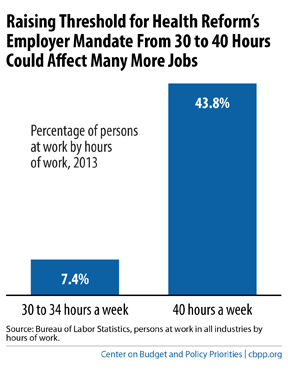 Only about 7 percent of employees work 30 to 34 hours (that is, at or modestly above health reform’s 30-hour threshold), but 44 percent of employees work 40 hours a week and thus would be vulnerable to cuts in their hours if the threshold rose to 40 hours.  (See figure.)  Under the Boehner-McConnell proposal, employers could easily cut back large numbers of employees from 40 to 39 hours so they wouldn’t have to offer them health coverage.

If you exclude workers at firms that already offer health insurance and thus won’t be tempted to cut workers’ hours, more than twice as many workers would face a high risk of reduced hours under a 40-hour threshold than under the current 30-hour threshold, according to New York University economist Sherry Glied.

There’s little evidence to date that health reform has caused a shift to part-time work.  There’s every reason to expect the impact to be small as a share of total employment, as we have explained.  And raising the cutoff for the employer mandate from 30 to 40 hours a week would be a step in the wrong direction.

November 6, 2014
PreviousToday's Jobs Report in Pictures
NextUsing Private Investment to Preserve Public Housing
Stay up to date
Receive the latest news and reports from the Center