We’ve highlighted some of the safety net’s successes this week, including the positive effects of SNAP (Supplemental Nutrition Assistance Program, formerly food stamps) in lifting people — particularly children — out of poverty.  Despite these successes, all SNAP participants face a serious benefit cut on November 1, when the 2009 Recovery Act’s temporary benefit boost ends. The U.S. Agriculture Department announced the size of those cuts today.  For a family of three, the cut will be $29 a month — or $319 over the remaining 11 months of the fiscal year (see chart).  Our revised paper details the cuts, including the estimated effect in each state.
Image 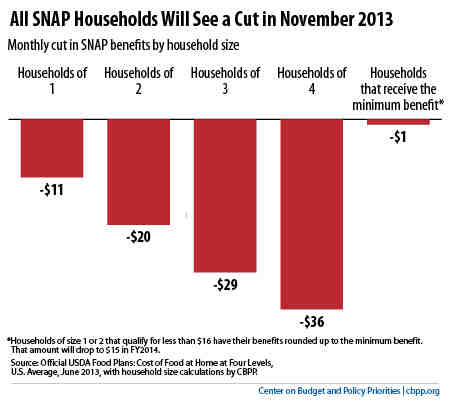 That’s a serious loss, especially in light of the already very low basic SNAP benefits.  Without the Recovery Act’s boost, SNAP benefits in fiscal year 2014 will average less than $1.40 per person per meal.  Nutrition experts have long held that these levels are inadequate to meet families’ basic food needs. These cuts will likely cause hardship for some SNAP participants, who include 22 million children (10 million of whom live in “deep poverty,” with family incomes below half of the poverty line) and over 9 million people who are elderly or have a serious disability.  Moreover, they’ll reduce funds for a program that has proven its effectiveness. Meanwhile, House Republican leaders are working with the House Agriculture Committee to develop a stand-alone SNAP package to add to the House-passed farm bill package.  That SNAP-only bill could include cuts even deeper than the $20.5 billion that the House originally considered and rejected.  The November benefit cut already will make it tougher for millions of families to put food on the table.  Congress should reject proposals that would increase this burden on our most vulnerable people. Click here to read our full paper on the Recovery Act cuts, including estimates of the state-by-state impact.
Related Posts:
Topics:
Federal Budget, Food Assistance
Previous“Nun on the Bus” Shows Congress How the Safety Net Improves Lives
NextLatest Health Reform Repeal Effort Would Make Coverage Less Affordable
Stay up to date
Receive the latest news and reports from the Center