Behind the Jobless Benefits Debate #4: Who Gets Unemployment Insurance?

This is the fourth of a series of posts that look behind the debate over continuing a federal program that provides emergency unemployment benefits and explain what’s at stake for jobless workers and the economy. We've mentioned in the past the important poverty-fighting role of unemployment insurance (UI). As my colleague Arloc Sherman has explained, UI kept 3.3 million people out of poverty in 2009, due in no small measure to the federal emergency UI benefits that sustained the families of unemployed workers while they continued to look for a job after exhausting their 26 weeks of regular state UI benefits.
Image 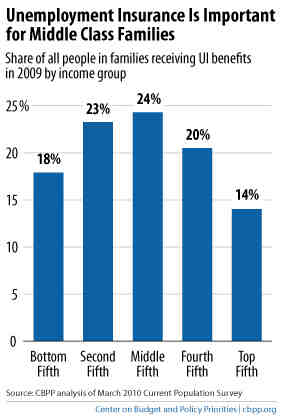 However, as critical as unemployment insurance is for many families near the poverty line, UI is also a bedrock middle class program.  My colleague Hannah Shaw has crunched the numbers and found that nearly 70 percent of families who received UI during 2009 had incomes in the middle 60 percent of the income distribution, as this chart shows. In an analysis released today, the Congressional Budget Office (CBO) reports that the median income of families receiving UI benefits was $54,800 in 2009. The median income of families receiving UI who had been unemployed for more than 26 weeks — those households who will not have access to any federal unemployment benefits in most states if Congress allows the emergency program to expire at the end of the month — is slightly lower at $49,000 but close to the middle of the income distribution. CBO also found that workers in families with incomes of more than twice the federal poverty line (about $44,000 for a family of four) are more than twice as likely to receive unemployment benefits during spells of unemployment than workers in families below the poverty line ($22,000 for a family of four). Both unemployment and poverty are likely to remain high in the coming year, and that is why it is critically important for Congress to extend emergency UI benefits through next year both to fight poverty and to sustain middle class families in which a breadwinner is unemployed. Other posts in the series:
Topics:
Economy
PreviousWhy State Film Subsidies Get Two Thumbs Down
NextNot-So-Progressive Price Indexing Is the Wrong Fix for Social Security
Stay up to date
Receive the latest news and reports from the Center