Behind the Jobless Benefits Debate #2: Do We Still Need a Federal Emergency Unemployment Insurance Program?

| By Chad Stone
This is the second of a series of posts that look behind the debate over continuing a federal program that provides emergency unemployment benefits and explain what’s at stake for jobless workers and the economy. As I discussed in the first post in this series, in every major recession since the 1950s, Congress has created a temporary program to provide additional weeks of unemployment insurance benefits on top of the 26 weeks of regular, state-funded benefits.  The reason is simple:  job opportunities are scarce in a weak economy and it can take jobless workers longer than 26 weeks to find a job, no matter how hard they are looking. These have always been temporary programs that end when the economy is back on track and job opportunities are starting to open up — but not before then. Basic economics tells us that we’re still far away from that point, which means it would be a serious mistake to let the current program expire on November 30.  As the chart below illustrates, the highest unemployment rate at which federal unemployment benefits have ended in previous recessions was 7.2 percent (in March 1985).  October’s unemployment rate was 9.6 percent. We have barely begun to climb out of the huge jobs hole that the recession created.  Over 40 percent of the unemployed have been looking for a job for more than 26 weeks.  Job opportunities remain incredibly scarce, with five job seekers for every opening. My colleague Hannah Shaw and I issued an analysis today that explains why renewing federal emergency unemployment insurance benefits for another year is good for the unemployed and for the economy, and why it won’t endanger efforts to address long-term budget deficits.
Image 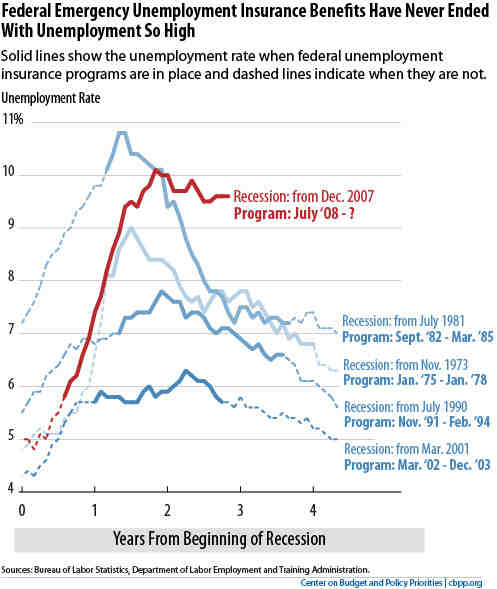 Other posts in the series:
Topics:
Economy