Another Tax Day Message for Congress: Time to Expand EITC for Adults Without Children

As the April 18 tax filing deadline approaches, 17 million adults not raising children at home and who do important jobs but for low pay are eligible to claim an expanded Earned Income Tax Credit (EITC). Many of these adults, and all adults aged 19-24 (excluding students) and 65 and older, didn’t qualify for any EITC until the American Rescue Plan made them eligible in tax year 2021 — and they’ll again be ineligible starting this year unless policymakers extend this important fix to the EITC, an otherwise highly successful wage subsidy with bipartisan support.

The American Rescue Plan in 2021 raised the maximum EITC for workers without children from roughly $540 to roughly $1,500, and raised the income limit to qualify from about $16,000 to more than $21,000 for unmarried filers and from about $22,000 to more than $27,000 for married couples. It also expanded the age range of workers without children eligible for the tax credit to include younger adults aged 19-24 (excluding students under 24 who are attending school at least part time), as well as people 65 and over.

These changes made nearly 11 million workers without children newly eligible for the EITC; most will claim it when they file their 2021 tax returns this year (though claimants who miss filing a tax return this year still have three years during which they can file and claim their expanded credit). (See table below for details on these 11 million.)

In all, an estimated 17.4 million low-paid adults without children across the country will benefit from the expanded credit, including roughly 9.7 million white, 3.6 million Latino, 2.7 million Black, and 816,000 Asian workers. These adults work as cashiers, home health aides, child care workers, and in other roles crucial to people’s daily lives.

Among those benefiting from the Rescue Plan’s EITC expansions are nearly 6 million working adults aged 19 and older who aren’t caring for children and who will again be taxed into, or deeper into, poverty under current law because their EITC will be zero or paltry. (See graph.) This group includes about 3 million white, 1.3 million Latino, and 1 million Black workers (but excludes full-time students under age 24), many of them young and trying to gain a toehold in the labor market. 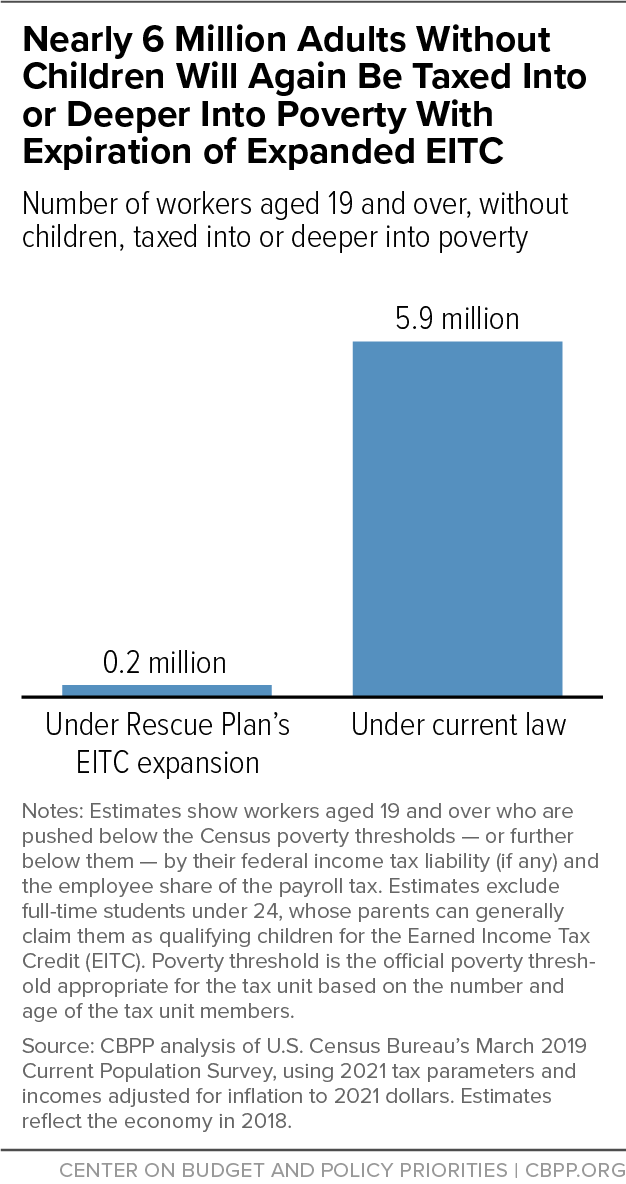 To see how the Rescue Plan will help this year at tax time, consider a 25-year-old single woman who worked roughly 30 hours a week throughout 2021 as a child care worker and earned about $9.50 an hour. Her annual earnings of $14,250 were just above the poverty line of $14,097 for a single individual. Without the Rescue Plan, federal taxes would have pushed her into poverty:

This important EITC provision, however, was only the law for 2021, and if Congress fails to act, more than 17 million working people will lose this enhanced wage subsidy at a time when the costs of basic needs are rising. The EITC has long enjoyed bipartisan support, and policymakers should use it not just to stop the federal government from taxing people into poverty but to provide a crucial income boost to people who work important jobs for low pay. The way to ensure that is to extend this critical expansion of the EITC. It’s time for Congress to do just that.

Notes: The American Rescue Plan in 2021 increased EITC eligibility for workers without children by raising the income limit to qualify from $15,980 to $21,430 for unmarried filers and from $21,920 to $27,380 for married couples, and by expanding the age range to include younger adults aged 19-24 (excluding students under 24 who are attending school at least part time), and people 65 and over. The number of working adults newly eligible due to the Rescue Plan’s expanded age range includes adults in those age groups whose income falls in the increased income limit range. The Rescue Plan also extends eligibility to former foster youth and youth experiencing homelessness starting at age 18, who are not counted in this table and would make the total number newly eligible slightly higher. Racial and ethnic categories do not overlap; figures for each racial group such as Black, white, or Asian do not include individuals who identify as multiracial or people of Latino ethnicity. Latino includes all people of Hispanic, Latino, or Spanish origin regardless of race. Due to limitations of the Census data, the figures do not reflect IRS rules that require all EITC family members to have a Social Security number. As a result, the Latino figures, in particular, may be somewhat overstated.

Source: CBPP analysis of the March 2019 Current Population Survey allocated by race or ethnicity based on CBPP analysis of American Community Survey data for 2016-2018. Estimates are based on the economy as of 2016-2018 using tax year 2021 tax rules and incomes adjusted for inflation to 2021 dollars.

This Tax Day, Many Are Eligible for Larger Refunds Due to Credit Expansions

Economic Legislation Should Include Key Measures for People With Disabilities