Policymakers and pundits sometimes describe the work of people participating in SNAP (formerly food stamps) by using the share of working-age adults with jobs in an average month while they’re receiving SNAP. That understates SNAP participants’ level of work and can be misleading, causing some to believe that more SNAP participants don’t work than is the case over time, as the infographic below illustrates. In fact, most SNAP participants do work, but they often experience periods of joblessness, as our recent paper and animation show.

Data showing work among participants while they’re participating in SNAP undercount their full extent of work. That’s due in part to the fact that workers often cycle in and out of SNAP, and they may not be reflected in statistics in any given month. Because many low-wage workers experience job volatility, they may be eligible for and participate in SNAP for a period of months, and then stop participating once their situation improves. As a result, more workers participate over a year than do in any given month.

Also, workers often participate in SNAP when they’re between jobs, so many of those non-workers in an average month are in fact workers who will go on to work. Among a group of non-disabled adults who participated in SNAP in a given month in mid-2012, about half were working that month, but close to half of those who weren’t working that month did work within a year. Of the broader group of adults who participated in SNAP at any point over several years, including short-term participants, over 80 percent worked, and they worked most of the time, our analysis found. They participated in SNAP a greater share of the months when they were out of work, however, which helps explain why many are jobless in an average month.

Those wishing to understand SNAP participants’ work should look at their work patterns over a longer period rather than in an average month. Instead of seeing close to half of non-disabled adults out of work (or more, depending on the data source), in a given month while participating in SNAP, they would see that a much smaller group — less than one-fifth of this population — is consistently out of work over time.

Many of those who were consistently out of work had serious responsibilities or faced barriers to employment. The most common reasons adults gave for not working were that they were caring for family members, had health conditions that limited their ability to work, or were looking for work and couldn’t find it. They were also more likely to lack a high school degree, which often limits job prospects.

The available evidence provides key lessons for policymakers. Many people who aren’t working in a given month while participating in SNAP will be working again soon. Targeting interventions — for example, by requiring temporarily jobless participants to find a job or participate in a job training program in order to continue participating — may not be an effective use of resources because they’ll return to work even without such an intervention. Penalizing them for experiencing a period of joblessness would make it harder for them to put food on the table while they look for work. Helping the small share of participants who consistently are out of work increase their ability to work would require an assessment of those barriers as well as the tools to address them. 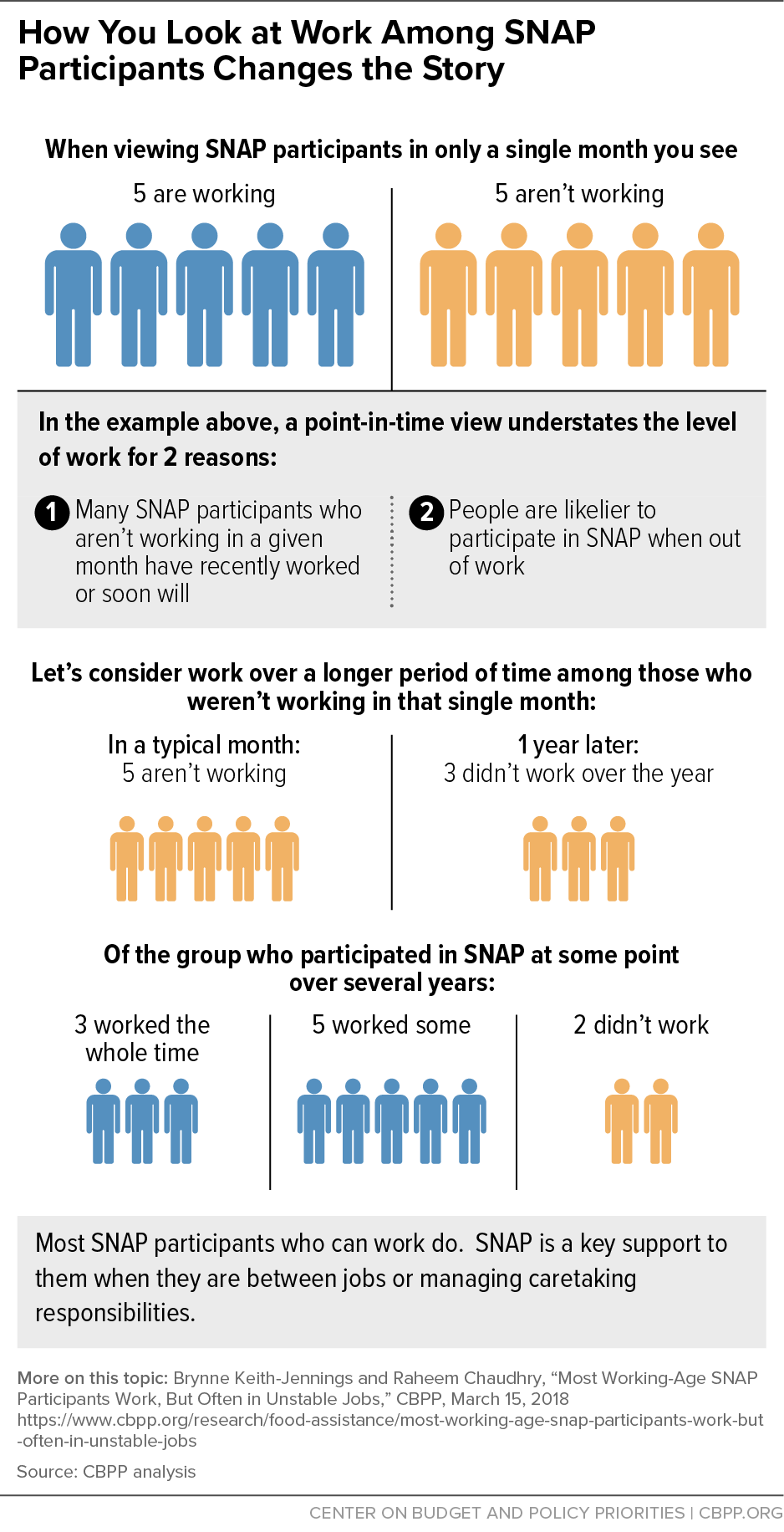 Most SNAP Participants Move In and Out of Work: An Animated Look

June 5, 2017
PreviousWhy a Balanced Budget Amendment Would Harm Social Security and Federal Deposit Insurance
NextNew CBO Budget Projections Are Cause for Concern — Not Alarm
Stay up to date
Receive the latest news and reports from the Center