A Worthy Alternative to the Payroll Tax Cut

We’ve explained that if policymakers don’t extend the temporary cut in the Social Security payroll tax, every paycheck in America will shrink starting next month, slowing next year’s economic growth rate by 0.6 percent, according to Goldman Sachs.  The President proposes extending this tax cut for one year or replacing it with something comparable.

An alternative that the Urban-Brookings Tax Policy Center’s Roberton Williams advanced last year deserves a fresh look:  bring back the “Making Work Pay” tax credit for one year and double it, for about the same total cost as simply extending the payroll tax cut for one year. 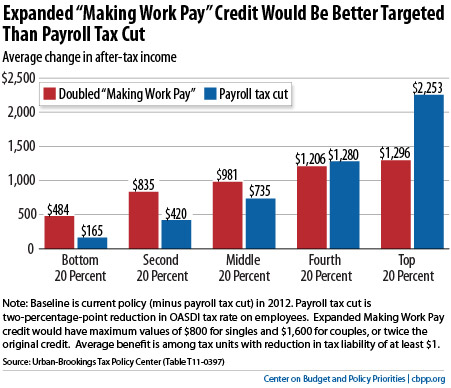 A new Making Work Pay credit worth up to $800 for singles ($1,600 for couples) would cost roughly the same as extending the payroll tax cut.  But it would have greater bang-for-the-buck because it would flow more to moderate-income people (see chart), who are more likely to spend rather than save any extra income they receive.

And, because Making Work Pay operates through the income tax, it would put to rest concerns that continuing the cut in payroll taxes — which help fund Social Security — would undermine that program.  (As we’ve noted, offsetting contributions to the Social Security trust funds from general revenues have held the trust funds harmless from the reduction in payroll taxes, and this arrangement doesn’t pose a danger as long as it remains strictly temporary.)

If policymakers can’t agree on an expanded Making Work Pay or another equivalent alternative, they should extend the payroll tax cut.  The economic risks of letting it expire are just too high.

How Many Workers in Each State Would Benefit from Extending the Payroll Tax Cut?

Good News: The Payroll Tax Cut Is Now Part of the Tax Debate

2009 Recovery Act Strikingly Effective at Keeping People Out of Poverty

May 31, 2012
PreviousThe Real Danger to the Economy
NextJust the Facts on SSI and Disabled Kids
Stay up to date
Receive the latest news and reports from the Center