A Lost Decade in the Fight Against Poverty

The poverty rate rose by a statistically significant amount in 32 states over the past decade and didn’t fall by such an amount in any state, according to preliminary state figures the Census Bureau released yesterday (see map).
Image 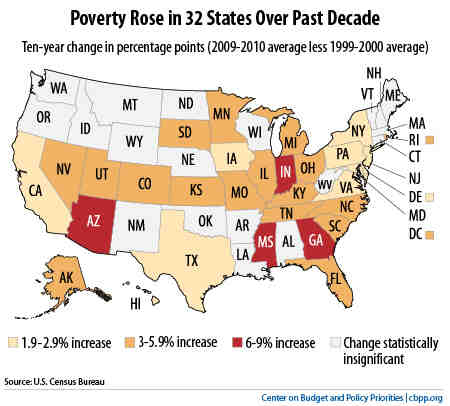 In some states, the poverty rate rose at an especially rapid pace. In Indiana, poverty rose nearly 9 percentage points to reach 16.2 percent.  The other three states with the biggest percentage-point increases in poverty — Arizona, Georgia, and Mississippi — ended the decade with poverty rates of 19.9 percent, 18.5 percent, and 22.9 percent, respectively. Higher poverty rates were driven largely by the economy.  The Great Recession that began in 2007 and a milder recession in 2001 were bookends to the only economic recovery on record in which the national poverty rate was higher at the end than at the beginning. The rise in poverty between 2001 and 2007, along with the rise in income inequality and the decline in real median incomes of non-elderly households, were among the signs that the benefits of economic growth did not filter down to many in the middle and the bottom of the income ladder. The economic hard times that began in 2007 have hit some states much harder than others, which partly accounts for the differences among states in how much poverty has grown over the past decade. Some states on their own have worsened hardships among vulnerable families through unnecessarily harsh cuts to programs that help them.  This year, a number of states continued this disturbing trend by deeply reducing cash assistance or ending it entirely for families living well below the poverty line.  Ten states have taken steps to cut regular unemployment benefits. That’s not the path to a stronger future. As we’ve detailed, poverty among young children slows them in school and appears to diminish their earnings later in life. And that means a weaker economy for all of us.
Topics:
Poverty and Inequality, State Budget and Tax, Family Income Support
PreviousToday’s Census Report in Pictures
NextA Close Look at the New Census Numbers
Stay up to date
Receive the latest news and reports from the Center