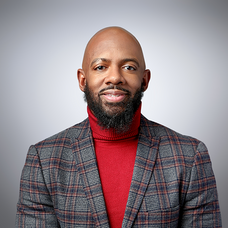 Jamie R. Riley is the Vice President of Equity and Inclusion. He has worked as a racial justice and social change agent in higher education and/or nonprofit administration for almost two decades. Most recently, Riley served as the National Director of Race and Justice at the NAACP where he supported the association’s advocacy, mobilization, research, and coalition-building around racial justice, criminal justice reform, and economic inclusion. Previously, he led his own diversity and strategic planning consulting company, Engaging U, LLC, and served as the Director of Racial Equity at the Center for Law and Social Policy (CLASP). While at CLASP, Riley led organizational strategies to center racial equity within the organization’s cultural and external policy and advocacy efforts. Prior to that, he served as the Executive Director and Chief Operating Officer at Alpha Phi Alpha Fraternity, Inc., the first African American intercollegiate fraternity.

Throughout his career Dr. Riley has also taught racial and social justice courses at various colleges and universities, including the University of Georgia, University of California, Berkeley, University of Maryland, and Howard University. As a published researcher, he identifies as a critical race theorist and investigates the systemic role of race and racism within U.S. culture, systems, and institutions. A native of Cincinnati, Ohio, Riley attended Tennessee State University, the state’s only public Historically Black College and University (HBCU), where he received a Bachelor of Science in Healthcare Administration and Planning and a Master of Education in Education Leadership and Administration in 2004. He also received his Ph.D. in Counseling and Human Development from the University of Georgia in 2011.