In 2010, 22.9 percent of rural tax filers — compared with 20 percent of filers nationwide — claimed the Earned Income Tax Credit (EITC), according to research by the Brookings Institution and the Carsey Institute.[1]   This difference reflects rural areas’ generally lower wage levels.  The EITC brought $10.5 billion in benefits to rural America in 2010, an average of $2,245 for nearly 4.7 million rural EITC filers.

The share of rural EITC filers that also receive the refundable portion of the Child Tax Credit (CTC) has grown in recent years as well, the researchers found.  The refundable portion of the CTC provided these rural children and families with more than $3 billion in 2010 — important support for the 2.8 million beneficiaries, as well as the rural communities in which they live.

Similarly, one in three rural tax filers received either the EITC or the CTC (including both the refundable and nonrefundable portions) in 2008, an earlier Agriculture Department study found.[2]   These two credits provided these rural tax filers with a 13-percent increase in after-tax income, on average, for a total of $20.6 billion for families in rural communities.

The EITC and CTC kept 1.4 million rural Americans, including 700,000 children, above the poverty line in 2011, based on the federal government's new Supplemental Poverty Measure.[3] 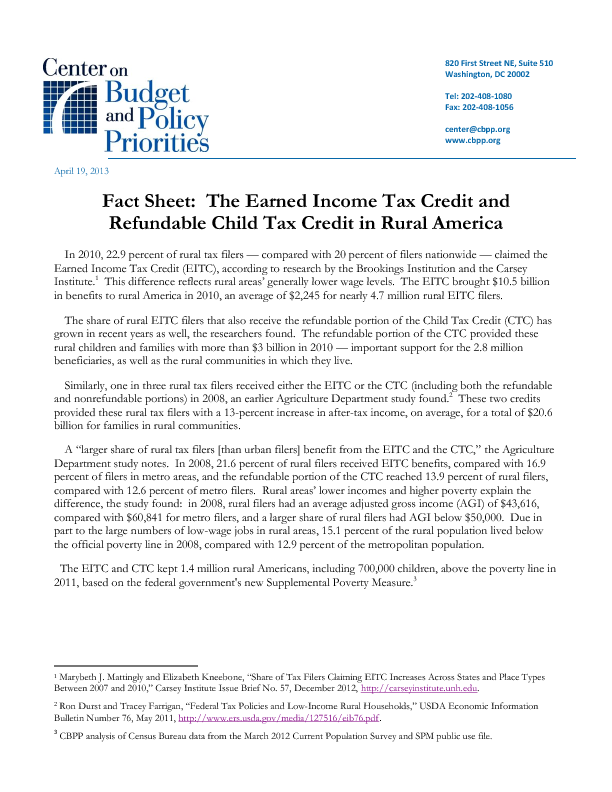