I appreciate the invitation to appear before you today.  I direct the Center on Budget and Policy Priorities, a nonprofit policy institute that conducts research and analysis on fiscal policy matters, as well as on programs and policies for low-income families and individuals.

Last winter, the Center was asked by the Carnegie Roundtable on Economic Security to review all long-term budget projections that had been conducted, assess their strengths and weaknesses, examine the latest data, and construct new long-term projections.  While we presented initial results to the Roundtable in May, this is a task we have worked on for close to a year.  As part of this effort, we have shared our methodology and sought comments and recommendations from many of the nation’s leading budget experts, including a number of former directors of the Congressional Budget Office.  We released yesterday the analysis and projections that are the product of this enterprise, and I am pleased to present them to you today.  These new budget projections extend through 2050.

The projections, based heavily on data and estimates from the Congressional Budget Office, are deeply disquieting.  They show that the nation’s budget policies are unsustainable.  Deficits and debt will grow to unprecedented and dangerous levels if policy changes are not made.

The new projections also shed light on the sources of these problems and on the types of changes that would be needed to address them responsibly.  Our principal findings are the following: 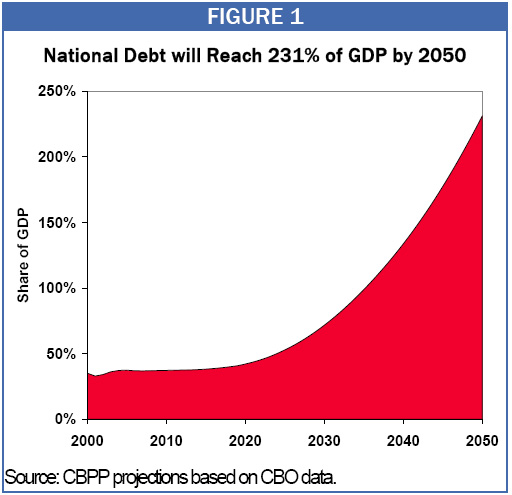 Click here to read the full-text PDF of this testimony (11pp.)