Where Is Public Housing Located?

The nation’s 1.1 million public housing units are located in all 50 states and several territories, one in five of them in rural areas.  As of 2016, more than 40 percent of units were in areas with low or moderate poverty rates, meaning that less than 30 percent of residents were poor.

Who Is Eligible for Public Housing?

In 2016, 90 percent of public housing households were elderly, had disabilities, worked, had recently worked, or were subject to work requirements through another program.

Undocumented immigrants are not eligible for assistance through public housing.

How Much Do Public Housing Tenants Pay for Rent? 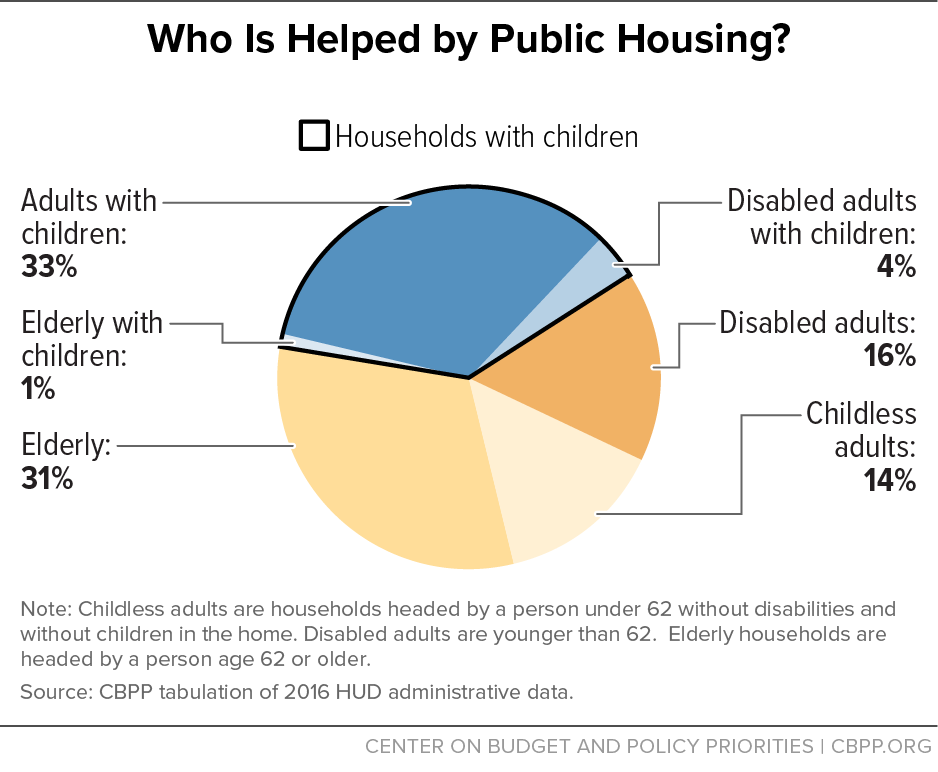 What Are the Benefits of Public Housing?

Public housing helps families to afford modest housing and avoid homelessness or other kinds of housing instability.  Some developments provide access to neighborhoods with stronger schools and more job opportunities, where it might otherwise be difficult for low-income families to rent homes. By limiting housing costs, public housing leaves families with more resources for work expenses like child care and transportation (as well as basic needs like food and medicine).  For frail seniors and people with disabilities, public housing enables them to remain in their home communities and avoid or delay moving into nursing homes or other institutions that are much more costly for state and federal governments.

Why Has the Number of Public Housing Units Declined Over Time?

The number of public housing units has fallen by more than 250,000 since the mid-1990s.  This is mainly because housing agencies have demolished or otherwise removed units from the stock, due to deterioration resulting from long-term underfunding and other factors.  Only a small share of the removed units have been replaced with new public housing.

In addition, since 2013 housing agencies have converted about 60,000 public housing units to long-term Section 8 Project-Based Voucher and Project-Based Rental Assistance contracts under the Rental Assistance Demonstration (RAD).  HUD can permit up to 185,000 public housing units to be converted under RAD, which is designed to provide more reliable funding and make it easier to attract private financing to address rehabilitation needs.  An interim evaluation estimated that conversion of the first 112,000 RAD units will leverage as much as $8 billion in private and public investment.

Who Owns and Manages Public Housing?

The number of public housing units has fallen by more than 250,000 since the mid-1990s….Only a small share of the removed units have been replaced with new public housing.

How Is Public Housing Funded?

The federal government funds public housing through two main streams: (1) the Public Housing Operating Fund, which is intended to cover the gap between the rents that public housing tenants pay and the developments’ operating costs (such as maintenance and security); and (2) the Public Housing Capital Fund, which funds renovation of developments and replacement of items such as appliances and heating and cooling equipment.

Both streams have long been deeply underfunded.  In all but two years since 2002, the federal government has provided less funding than agencies were due under the operating fund, triggering pro rata cuts to each agency’s funding.  Inadequate capital funding has contributed to a backlog of unmet renovation needs that reached $26 billion by 2010, according to a HUD study.

In addition, the Choice Neighborhoods Initiative (which Congress first funded in 2010 and has replaced the similar “HOPE VI” program) provides a small number of grants each year to revitalize distressed public housing developments. No funds have been provided to build additional public housing since the mid-1990s.